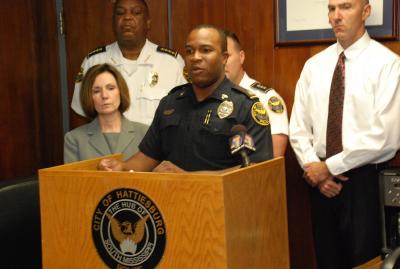 Three Jeff Davis County residents are in custody and police are seeking a fourth suspect in the shooting of three University of Southern Mississippi students early Sunday morning at a Hattiesburg nightclub.

Three warrants for aggravated assault have also been issued for Travis "Taurus" Brown, 29, described as a black male, 6-foot-1, approximately 185 pounds, who is believed to be the gunman in the incident.

The arrests and warrants stem from the shooting of Martez Smith, Tim Green and Deddrick Jones about 1:30 a.m. Sunday outside Remington's Hunt Club in Hattiesburg. All three Southern Miss students – who are interdisciplinary studies majors and members of the Golden Eagle football team - remain hospitalized in fair condition.