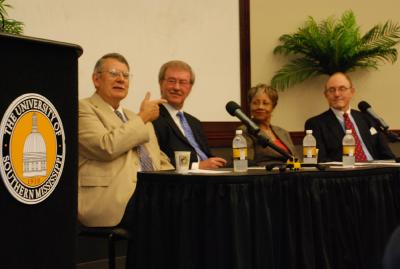 Noted author and educator Dr. Jinx Coleman Broussard credits a passion for communication as the key ingredient to a successful career that led to her induction into The University of Southern Mississippi School of Mass Communication and Journalism (MCJ) Hall of Fame.

“I get up every morning and absolutely love what I do,” said Broussard, a professor in the Manship School of Mass Communication at Louisiana State University who earned her doctorate at Southern Miss. “That's what I try to impress upon the young people I teach – a sincere love for what you choose as a career.”

Broussard joined nine others as the newest members of the Southern Miss MCJ Hall of Fame during the school's fourth annual symposium and induction luncheon on Nov. 18 at the Thad Cochran Center. Other inductees included the following:

Three journalists were inducted posthumously. They are:

Chris Campbell, director of the Southern Miss MCJ, said narrowing the list of inductees each year proves to be a daunting task.

“It doesn't take a lot of research to discover pretty quickly that Southern Miss has produced an amazing array of journalists over the years,” said Campbell. “I think the talent we have in our Hall of Fame, and those qualified to be in there, truly speaks for itself.”

Nation, the author of nine books, including “The Moving Feast,” a history of food production in Southeast Mississippi, said the Hall of Fame recognition caught him completely by surprise.

“I am obviously honored but I'm also aware that there are far more deserving people than me for this type of recognition,” said Nation. “The University of Southern Mississippi has a tradition of producing some of the finest journalists, not only in this country, but around the world.”