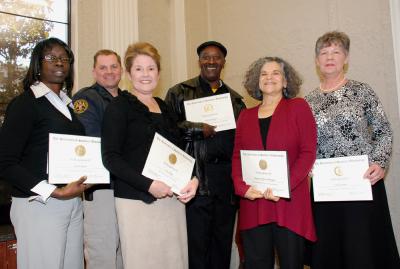 Odom was honored along with five others during the annual Staff Excellence Awards program which recognizes outstanding work among the more than 1,600 staff members employed by the university. The Jessie H. Morrison award is the highest honor bestowed upon a Southern Miss staffer. Morrison served as administrative assistant to three Southern Miss presidents – Dr. Richard A. McLemore, Dr. William D. McCain and Dr. Aubrey K. Lucas – and helped created an endowment to fund the staff awards upon her retirement.

“I had the pleasure of meeting Miss Jessie Morrison in 1982 when I moved to the Administration Building as a secretary in the Office of the Vice President for Academic Affairs,” said Odom, who has served four presidents in her 31 years at Southern Miss. “I am honored to have received such a prestigious award named after such a genuine, quintessential professional.”

The winners were nominated by their peers. Each received a commemorative plaque and a $1,200 cash award.