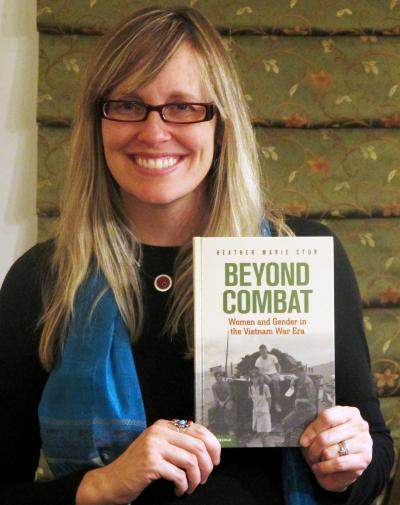 A new book by a University of Southern Mississippi history professor contends attitudes about the role of men and women in American society were unmasked in a profound way during the Vietnam War, including their impact in shaping U.S. foreign policy.

Dr. Heather Stur's “Beyond Combat: Women and Gender in the Vietnam War Era,” published by Cambridge University Press, shifts the focus away from the battlefields by spotlighting American gender and racial issues of the time.

“This was especially potent during the Vietnam era, because the war coincided with a period of significant social upheaval and cultural change on the home front,” said Stur.

After reading more deeply into what historians have written about the Vietnam War, Stur found that women's voices were relatively absent. In sharp contrast however, images of women and references to gender were very present in her research of government and military archives, as well as media coverage and original interviews, soldier folklore and basic training rhetoric.

“Because of that disconnect, I wanted to see what the Vietnam War would look like if women and gender were at the center of the story, and how it would reshape our understandings of U.S. intervention in Vietnam if the pervasive gender ideology that informed policymaking and American identity was analyzed, alongside how the actual experiences of women (and some men) on the ground in Vietnam both advanced and challenged those ideas,” she said.

Four recurring images frame “Beyond Combat” including the “dragon lady,” at once treacherous and mysterious, a metaphor for both Vietnamese women and Vietnam; the “girl next door,” a wholesome reminder of why the United States fought communism; the “gunslinger,” embodied in American popular culture by John Wayne and a symbol of the U.S. Cold War enterprise; and the “gentle warrior,” whose compassion toward the Vietnamese failed to mask the war's devastation.

When juxtaposed with the day-to-day experiences in Vietnam, Stur says the images exposed contradictions in the U.S. mission and the gender ideology that informed it. This led some of the men and women meant to personify the images to challenge and reject them, further delegitimizing U.S. intervention.

Further, Stur sees the Vietnam War not just as a military maneuver but a complex web of personal encounters between Americans and Vietnamese taking place in the “hothouse” environment of war.

“A substantial majority of interactions between American men and various groups of women, whether American or Vietnamese, occurred not in combat situations but on bases in Long Binh and Qui Nhon, in brothels in An Khe and Cam Ranh Bay and along the boulevards of cities such as Saigon and Da Nang,” she said.

Disillusionment with the war, combined with social activism on the home front inspired some American men and women to reject their assigned roles, using the GI antiwar press and military institutions to demand change.

Some male veterans sought a redefinition of masculinity not linked to “gunslinging,” while some women insisted on full integration into the armed services, where they would be considered soldiers and not morale boosters or symbols of why the U.S. fights.

“Despite real changes in American gender roles that occurred in the wake of the Vietnam War, the postwar period ushered in a new set of challenges related to deindustrialization and the culture wars that were on the verge of exploding,” Stur said.

Martin Morgan, a Southern Miss doctoral student in history, said Stur's book provides important new insights into the world of gender and culture in the age of the Vietnam War.

“Much can still be said about the meaningful ways that gender exerted influence over the U.S. concept of what the war was to be and what it was to represent,” Morgan said. “As Dr. Stur sensitively identifies in her book, American and Vietnamese women represented two diametrically opposed symbols of womanhood.  One was wholesome and reminiscent of home, while the other was foreign, exotic and tempting. Both images can be interpreted as a grand metaphor for the war in Vietnam.”

Stur hopes readers will see the Vietnam War, and war in general, as a space where men and women have specific roles and duties and that those roles are defined by home front culture.

“The home front and the battle front are very closely intertwined, and a look at how gender ideals constructed at home shape war making overseas provides a clear example of that,” she said.

More information about “Beyond Combat: Women and Gender in the Vietnam War Era,” and the images that inspired Stur's book can be found on her blog for Cambridge University Press at: http://www.cambridgeblog.org/2011/12/dragon-ladies-and-girls-next-door-images-of-women-in-the-vietnam-war-by-heather-stur/