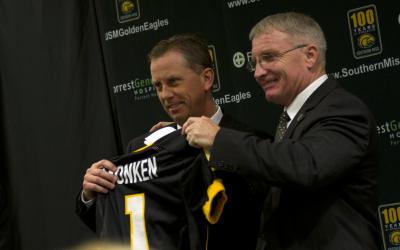 Southern Miss Director of Athletics Jeff Hammond announced on Tuesday, Dec. 11 the hiring of Todd Monken as the school's 20th football coach. The hiring is pending approval by the IHL Board of Trustees.

“We said going into this search that we wanted to find a dynamic leader with the character to lead our program back to prominence, so,” said Hammond.  “I believe today, with the hiring of Todd Monken, we have accomplished that. With his extensive background at some of the premier programs in college football and in the NFL, we believe he is perfectly positioned to return the Golden Eagles to competing both in Conference USA and in the national spotlight.”

Under Monken this season, the Cowboys – which had a true freshman starting quarterback to start the season and a redshirt freshman as the primary backup - ranked among the nation's top 10 nationally in scoring offense (4th/44.7 ppg), total offense (5th/548.9 ypg) and passing offense (7th/333.4 ypg). OSU will play in the Heart of Dallas Bowl on Jan. 1.

In the last two seasons, OSU has scored more than 50 points 10 times, broke the 60-point mark in five contests, the 70-point mark twice and the 80-point plateau once in just two years with Monken calling the plays.

Monken's offense produced the 2011 Biletnikoff Award winner in Justin Blackmon in addition to a pair of All-Americans in Blackmon and offensive lineman Levy Adcock and the Big 12 Offensive Lineman of the Year, Grant Garner.

Prior to returning to OSU for his second time, Monken spent four years as wide receivers coach for the Jacksonville Jaguars of the National Football League. He had been promoted to the role of Jaguars' quarterback coach immediately before taking the offensive coordinator job at Oklahoma State. In his final year in Jacksonville, the Jaguar trio of Mike Thomas, Marcedes Lewis and Mike Sims-Walker combined to make 167 catches for 2,082 yards and 21 touchdowns with Lewis earning a spot in the Pro Bowl.

Monken also worked at LSU from 2005-06, where he developed several receivers including Skyler Green, Dwayne Bowe and Buster Davis. Bowe and Davis were selected in the first round of the 2007 NFL Draft. Bowe combined with Davis and Early Doucet to form one of the nation's premier receiving corps in 2006. The trio combined for 180 receptions, 2,598 yards and 24 TDs. Bowe finished his career with 154 catches for 2,403 yards, and his school-record 26 touchdowns ranked eighth in SEC history.

In his first stay at OSU, Monken spent three seasons (2002-04) as pass game coordinator/wide receivers coach. The Cowboys averaged more than 32 points per game during that time. In 2004, Monken tutored first-round pick Rashaun Woods, who was selected 31st overall by the San Francisco 49ers. Woods was a two-time All-America honoree and concluded his career with 293 receptions for 4,414 yards and 42 touchdowns.

In addition, Monken spent seven seasons at Eastern Michigan (1993-99) including the last two as offensive coordinator and quarterbacks coach. He also spent time at Grand Valley State (1989-90) and Notre Dame (1991-92).

A native of Wheaton, Ill., Monken was a three-year letterwinner at quarterback for Knox College. He earned a bachelor's degree in economics (1989) and followed with a master's degree in education leadership from Grand Valley State. He is a member of the Knox College Athletic Hall of Fame. Monken and his wife, Terri, have one son, Travis.