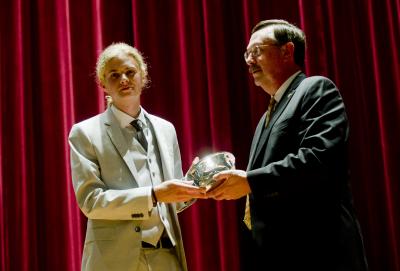 The achievements of The University of Southern Mississippi's students, faculty and staff were recognized Friday, March 30 during its Founders' Day celebration, as the institution marked the 102nd anniversary of its establishment by the Mississippi Legislature. The ceremony was held at Bennett Auditorium and followed by a reception at the Student Activities Hub.

The Bishop Award is given annually to a student who is a native Mississippian displaying an exemplary work ethic and determination to succeed, while also overcoming personal obstacles. It was established in 1978 by Elna Bishop in memory of her father, Judge R.J. Bishop, and includes a stipend.

“It's a great honor, and I've had a great experience here at Southern Miss,” Miller said. “The faculty in geography and anthropology are very supportive of me, and they make learning fun.”

Pace also expressed gratitude for the support of her professors in the School of Nursing. “I couldn't have come this far without them,” she said.

Dr. James Meade, a professor in the department of art and design who has served with its faculty since 1971, was inducted into the university's prestigious Centennial Legacy Circle. The circle was established during the university's 2010 Centennial Celebration to recognize current and former members of its faculty and staff who have given 40 or more years of service to Southern Miss. University employees marking their 30th, 20th and 10th year with the university were also recognized.

Other student awards and honors included the following:

Leave it Better Than You Found It Award: Alesha Knox

Other faculty and staff recognized for their achievements at Founders' Day include the following: