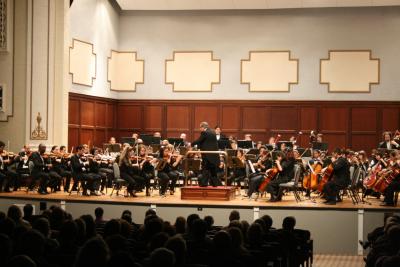 Dr. Jay Dean takes to the podium for the last time in his 25th season with The University of Southern Mississippi Symphony Orchestra when he conducts Mahler's Fifth Symphony on Thursday, March 28 at Bennett Auditorium.

The concert begins at 7:30 p.m. Now in its 93rd season, the Symphony Orchestra has flourished under Dean's direction, gaining an international reputation that enhances not only the university, but also the state and region.

“Such a program is simply not possible on most university and college campuses because of the technical and musical expertise required to execute such as piece “ said Dean of Mahler's Fifth Symphony. “This symphony is one of the most extraordinary, emotional and meaningful works in the entire body of symphonic literature.”

Written in the early years of the 20th century, Mahler's Fifth Symphony represents the composer at his most innovative and creative period. Mahler was fascinated by marches, and the symphony abounds in them. Accordingly, the first three movements are brassy and loud. His wife thought them excessively so, but her husband changed nothing in the score.

The fourth movement, adagietto, is arguably Mahler's most famous single piece of music, and is the most frequently performed extract from his works. Written as a love poem to his wife, Mahler left her a poem: “How much I love you, you my sun, I cannot tell you that with words. I can only lament to you my longing and love.”

It is perhaps best known for its use in the 1971 Luchino Visconti film “Death in Venice.” The movement was also conducted by Leonard Bernstein at the massat St. Patrick's Cathedral, New Yorkin June 1968, the day of the burial of Robert Kennedy. It was also the music used by Canadian figure skating ice dancers, Tessa Virtueand Scott Moirat the 2010 Winter Olympics. They performed their free dance to this music at both the Olympics and the 2010 World Championships, winning gold medals at both events.

“The orchestra has worked very hard to prepare this special program,” said Dean. “Given the circumstances of the last month and the incredible losses to our musical community, it is a testament to the resilience of the faculty, staff and students of the School of Music.”

The symphony regularly performs to sold-out houses with audience members representing a diverse cross-section of the southeastern United States. His recruiting efforts have turned the organization into a multinational conglomerate.

“I am humbled by the generous support so many have shown this orchestra over the years and in particular, this year,” said Dean. “So many students, faculty, staff, alumni and friends have worked hard to make this ‘little orchestra that could' really soar. I am so grateful.”

Dean is a musical ambassador for Mississippi. In 2009, the State of Mississippi recognized his and the orchestra's efforts with the Governor's Award for Leadership in the Arts. Dean's central mission is to provide life-changing experiences for his students and raise the quality of life in the community and state of which he is a part.