School of Music Performances Resume with the Arabesque Winds 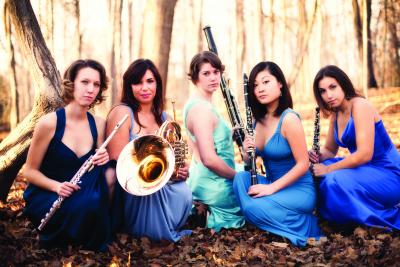 The Arabesque Winds quintet will perform a free concert on Tuesday, Feb. 19 at First Presbyterian Church in Hattiesburg. (Submitted photo)

Martin Luther once said, “Beautiful music is the art of the prophets that can calm the agitations of the soul; it is one of the most magnificent and delightful presents God has given us.”

After the trials of the past week and the long journey to recovery ahead, The School of Music at The University of Southern Mississippi will proudly resume performances with the Award-winning Arabesque Winds in a free concert on Tuesday, Feb. 19 at 7:30 p.m. as part of the Connoisseur Series. With performance spaces at Southern Miss in ruins, First Presbyterian Church in Hattiesburg has offered its sanctuary to aid in the recovery.

Playing “with skill and depth beyond their years,” (Washington Post) the quintet is dedicated to the performance of contemporary wind music. Their fresh, energetic, and interactive performances, have won the group the Coleman-Saunderson Prize for Woodwinds and Brass at the Coleman Chamber Ensemble Competition, Harvard Musical Association's Arthur W. Foote Prize, the John Celentano Prize for Excellence in Chamber Music, and Second Prize and the Lucien Guerinel Prize at the Henri Tomasi International Woodwind Quintet Competition in Marseilles, France.

They were also awarded the Grand Prize at the 2008 International Chamber Music Ensemble Competition in what the judges described as "an astounding performance" at Carnegie Hall's Weill Recital Hall.

“This is a wonderful opportunity for the community to join us as we move forward into the next chapter of our musical lives,” said Alexander Russakovsky who heads up the Connoisseur Series. “We are grateful to Partners for the Arts for their support of outstanding performances and indebted to First Presbyterian Church for providing in our time of need.”

Dr. Larry Smith, who is also recovering from storm damage to his office in the Fine Arts Building, was instrumental in making this event continue as planned. As part of the music ministry at the church, he has worked diligently to find performance spaces for upcoming events.

“The School of Music is grateful to the amazing community who has come to our aid during this trying time,” said Mike Lopinto, PR/Marketing and Event Coordinator for the school. “Most all of our recitals have had to find other venues. The offers of space have been inspiring.”

As active supporters of music outreach, the Arabesque Winds have presented interactive and educational programs in schools and community venues all over the country. In January 2011, they collaborated for the third consecutive year with the Rochester City Ballet to present a children's program featuring Prokofiev's Peter and the Wolf.

They have served as ensemble-in-residence, giving master classes and performing alongside students, in the public schools of Washington, DC, Texas, Florida, New Jersey, Pennsylvania, New Hampshire, and New York.

First Presbyterian Church is located on Hwy 98 West in Hattiesburg. The concert is free and the public is invited. More information may be found at www.arabesquewinds.com. To stay informed of all the relocations as they happen, please visit www.usm.edu/music.