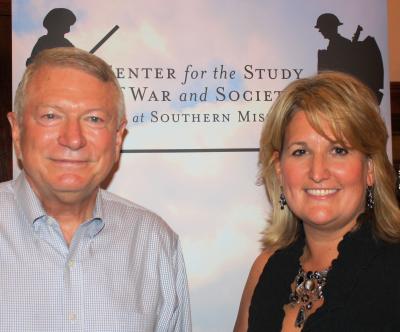 Susannah Ural, right, a member of the university's Department of History faculty, was recently awarded the General Buford “Buff” Blount (left) Professorship in Military History at a reception held recently at Blount's home in Hattiesburg.

A University of Southern Mississippi history professor is the first recipient of a professorship named for a Southern Miss alumnus and hero of the second Gulf War.

Susannah Ural, who also serves as co-director of the university's Center for the Study of War and Society, was recently awarded the General Buford “Buff” Blount Professorship in Military History at a reception held recently at Blount's home in Hattiesburg.

The Blount Professorship will be awarded biannually to provide funding for the work of a member of the Department of History engaged in research toward publication of a major study in the field of War and Society. At the end of their two-year term, the holder of the Blount Professorship Chair will present a lecture or program based on the findings of their research.

“It's a tremendous honor to be the first recipient of the Blount Professorship in Military History. The time it allows me to write my next book is invaluable,” Ural said. “More importantly, reaching far beyond my own work, the scholarly contribution that each Blount Professor will make to our field will significantly add to our understanding of societies at war.”

Ural specializes in the U.S. Civil War era and is the author of several books, including most recently Don't Hurry Me Down to Hades: The Civil War in the Words of Those Who Lived It. She is working on her fourth book, Hood's Boys: John Bell Hood's Texas Brigade and the American Civil War.

She said the professorship also increases the reputation of Southern Miss and the Center for the Study of War & Society within the field of military history. “Simply put, we cannot do our work without the support of leading donors like General and Mrs. Blount, and I know I speak for the Center faculty and our outstanding graduate students when I thank them for creating the Blount Professorship in Military History,” Ural said.

A native of Bassfield, Miss., Blount graduated from Southern Miss in 1971 and went on to a distinguished career in the U.S. military, rising in rank to major general before retiring in 2005. His resume includes leading the U.S. 3rd Infantry Division into Baghdad in 2003, toppling the regime of Iraq dictator Saddam Hussein.

“We're very pleased to support this professorship, and I'm very happy for Dr. Ural being its first recipient,” Blount said.