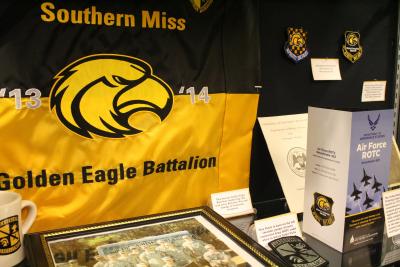 Using selections from the University Libraries Special Collections at the McCain Library and Archives, an exhibit is on display in the Cook Library lobby honoring the University of Southern Mississippi's longstanding relationship with veterans and military.

Using selections from the University Libraries Special Collections at the McCain Library and Archives, an exhibit is on display in the Cook Library lobby honoring the University of Southern Mississippi's longstanding relationship with veterans and military.

The exhibit offers early historical images of veterans and the military at Mississippi Normal College, State Teachers College, Mississippi Southern College and The University of Southern Mississippi. Special Collections also preserved archives, books, photographs, memoirs and oral histories documenting conflicts throughout the University's history – including some material pre-dating the college (e.g., the Civil War). Veterans and their families in the South Mississippi region have donated many of these items and some additional material related to nearby Camp Shelby.

Stephen Haller, curator of Historical Manuscripts and Archives, organized the exhibit. Haller is also a veteran, having served three years in the U.S. Army and in Vietnam.

“On behalf of the USM Center for Veterans, Service Members and Families, we are honored that our heritage is exhibited and featured in Cook Library,” said General Jeff Hammond, Special Advisor to the University President on Military Veteran Student Affairs. “We appreciate Stephen Haller's initiative to showcase our “Military Friendly” university and the loyal and the loyal and dedicated service of our Veterans and their families. On this Veteran's Day, it is my hope that all Americans will pause to reflect on the many sacrifices made by those who served for the sake of freedom.”

Additionally, the exhibit highlights both the U.S. Army and U.S. Air Force ROTC programs as well as the University's new Center for Military Veterans, Service Members and Families and the Chapter of Student Veterans Association. The Dale Center for the Study of War and Society housed in the Department of History is also described and illustrated in the exhibit.

The exhibit will be available for viewing until December. For more information on this exhibit or the materials retained in McCain Library and Archives, contact Stephen Haller at 601.266.4117 or e-mail stephen.hallerFREEMississippi.