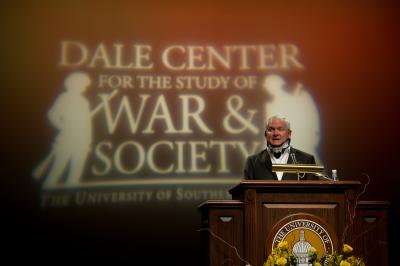 Gates, who also served as Director of the Central Intelligence Agency, shared details of his professional life with the packed audience. The presentation included excerpts from his recent autobiography, “Duty: Memoirs of a Secretary at War.”

Gates offered high praise for the men and women of the U.S. military, calling his “love for the troops” the chief motivation for his responsibility as Secretary of Defense.

“During one of my visits with our soldiers in Iraq and Afghanistan, a young man asked me what kept me up at night?” said Gates. “I told him he did.”

“Nobody who has been in combat could walk away without scars of some kind,” Gates added. “In my private moments I thought about all the lives that had been damaged or lost in those wars, and it was all I could do to not be overcome with emotion.”

In the highly publicized and much-discussed book, Gates covers his decades of service to the country and provides a unique look inside the war-room deliberations of Presidents George W. Bush and Barack Obama and delivers candid assessments of each man's management style.

Gates served as the 22nd Secretary of Defense from 2006 to 2011, a period of time that spanned the presidencies of both Presidents George W. Bush and Obama. Prior to that appointment, he served nearly 27 years in the CIA and the National Security Council. On Gates' last day in office, President Obama awarded him the Presidential Medal of Freedom — the country's highest civilian honor.

His lecture also included sharp criticism of the “dysfunction in Washington” that ultimately forced him out of government service.

“When the TV cameras came on during Congressional hearings, it basically had the same effect as the moon on werewolves,” said Gates. “I kept asking myself ‘why am I at war with everyone? Why is it so difficult to get anything done?' It got to the point where every issue was a constant source of conflict and stress.”

The lecture series is funded through the generosity of Southern Miss alumna Dr. Beverly Dale in honor of her father's service as Professor of Military Science, Head of the Department of Military Science and Head of the ROTC Program at USM from 1957-61 and 1964-66. Lt. Col. Dale was a veteran of World War II and the Korean Conflict.

Thursday's program also included an important announcement regarding the lecture series' facilitator — the Center for the Study of War & Society. The center has been renamed the Dale Center for the Study of War & Society in honor of the Beverly Dale family. The Dale Center at Southern Miss serves as a local, national, and international center of excellence for the study of the history of warfare.

The naming of the center coincides with the public announcement of a $2 million campaign to benefit the Dale Center. Approximately $1.6 million toward the $2 million goal already has been committed to support the Dale Center through operational and scholarship endowments as well as enhancements of professorships and lecture series.

Dr. Susannah J. Ural, co-director of the Dale Center and the Blount Professor of Military History at Southern Miss, beamed when reflecting on Gates' presentation.

“As we had hoped, he inspired the audience to critically assess America's role in the world and to reject the political divisiveness that, as he has said before, is one of the greatest threats to our national security,” said Ural.

“We're also thrilled to have announced the naming of the Dale Center for the Study of War & Society at such an appropriate venue, made possible through the steadfast support of our most generous patron, Dr. Beverly Dale. Engaging a full house at the beautiful Saenger Theater, Dr. Gates and the Dale Center have demonstrated, once again, that the Dale Lecture is one of the premier scholarly events in the region.”