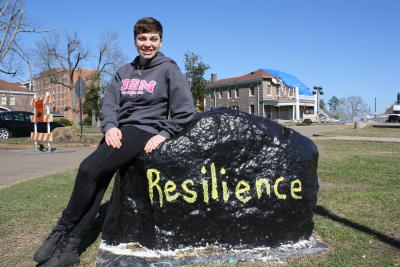 On Monday, Feb. 10, The University of Southern Mississippi marked a year since a destructive EF-4 tornado struck its Hattiesburg campus, damaging buildings and destroying trees, primarily at its front entrance next to Hardy Street.

University officials are pleased with progress to restore the campus and look forward to completing all work connected with recovery from the storm by the end of 2014.

“We have demonstrated that our resolve can help us weather the darkest of storms,” said Southern Miss President Rodney Bennett during a convocation held today at Bennett Auditorium to update the university community on the progress the university has made. “When we come together, great things are possible.”

Bennett was joined by Dr. Chris Crenshaw, director of the university's Physical Plant, who gave an update on storm-recovery projects. “By December, I believe we should see the completion of work on those projects connected to the damage caused by the storm,” he said.

The one building that for many was symbolic of the tornado's impact on the university was the iconic and beloved Ogletree Alumni House, one of the Hattiesburg campus's original structures which served first served as the president's home. Work is ongoing to restore the landmark building.

Other work includes repairs to roofs and windows, along with some interior damage, to a variety of other buildings including Kennard-Washington, Southern and McLemore Halls and facilities housing music performance classes.

An extensive landscaping project to replace trees and others vegetation on the campus's historic entrance area, is progressing with the help of generous donations from alumni and friends of the university. Five large mature live oaks were planted last May as part of this effort.

Other details of the university's storm recovery include:

*The Mississippi Legislature provided  $1.1 million to the School of Music for instrument repair and replacement.

*In addition to new live oaks, extensive landscaping and sidewalk work, the expansion of Lake Byron and the addition of a magnificent bronze eagle sculpture donated by alumnus Chuck Scianna have helped restore and enhance the beauty of the front entrance of campus.

Provost Denis Wiesenburg also gave an update on the progress of academic affairs at the university, praising the immediate work of faculty and administrators to accommodate students who needed space for 85 classes that needed to be moved after the storm damaged the Fine Arts and Performing Arts facilities.

He also noted the university continued to make significant achievements in the academic arena throughout the year since the storm, including students who earned prestigious Goldwater and Truman Scholar awards and Fulbright Fellow awards for faculty.

“What we've accomplished is a real testament to the resiliency of our faculty, staff and students,” Wiesenburg said.

Southern Miss Student Government Association President Ann Marie Chilcutt said it's hard to believe that it's been nearly a year since the storm. “Sometimes you can take things for granted, and I believe this event taught us never to do that,” Chilcutt said. “What you love can be taken away so fast, and we were lucky the damage to the university wasn't worse.”

With memories of the days following the event still fresh in her mind, the senior from Columbus, Miss. has been reflecting on how students, faculty, staff and supporters of USM responded to help.

“Just a couple of days after the tornado, more than 1,000 people who love this university turned out to help clean up and get us back on the road to recovery,” she said. “Today, we're progressing physically and emotionally, and continue to be so proud of Southern Miss, this place we call home.”