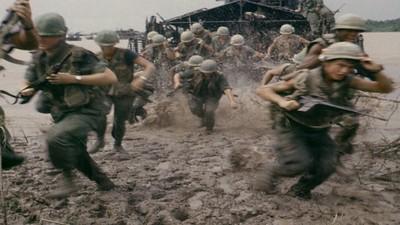 The National Geographic documentary “Brothers in War” is based on Dr. Andrew Wiest's book “The Boys of '67: Charlie Company's War in Vietnam” (Photograph by Department of Army/National Archives)

The world premier of a film about the exploits of an American military unit in the Vietnam War includes expert consultation from University of Southern Mississippi distinguished professor of history Dr. Andrew Wiest.

Wiest, founding director of the university's Dale Center for the Study of War and Society, was contacted more than three years ago by Lou Reda productions to serve as a consultant on the documentary “Brothers in War” which is based on Wiest's book “The Boys of '67: Charlie Company's War in Vietnam.”

One of the film's two world premieres will be held at 6:30 p.m. Tuesday, March 25 in the Solomon Victory Theater at the National World War II Museum in New Orleans, with a question and answer session to follow. A reception will be held at 5:30 p.m. prior to the screening. The Dale Center and the Museum are co-hosting this event, which is open to the public.

Narrated by actor Charlie Sheen, the documentary will air on the National Geographic Channel Wednesday, March 26 at 8 p.m. ET/PT. The channel's website describes the film as a recounting of “the harrowing combat experiences of the men of Charlie Company, one of the last American combat infantry companies to be drafted, trained and sent to fight together in Vietnam,” while also including “gripping first-person accounts and digitally remastered archival footage, including the soldiers' own home movies and personal audio tapes.”

The website notes the two-hour special as being “fittingly narrated by Sheen” who gained increased prominence for his acting after his 1986 performance as a Vietnam soldier in “Platoon.”

Vietnam veteran John Young of Picayune, Miss., who frequently joins Wiest in the classroom as a guest lecturer, is also a contributor to and featured in “Brothers in War.”

“It's such an honor to have this book chosen as the basis for the documentary, and for us to join with the World War II Museum to host the premiere,” Wiest said. The other premiere will be held in Washington, D.C. for those who participated in its production.

An Emmy-winning company, Lou Reda Productions also sought Wiest for consultation as lead historian for its documentary “Vietnam in HD.”

Wiest said he had two goals when he wrote “The Boys of ‘67” – to advance the field of study of the war and to educate the public about the soldiers who fought in it.

“It's one thing to have it published – lots of people read books,” Wiest said. “But a documentary can reach even more people, and therefore gets the story of those who fought to a wider audience.”

That's important to Wiest, who believes the Vietnam veteran is one who typically “would have rather not gone to Vietnam, but went anyway and did his best and came home to a country that forgot him.”

"This is the kind of thing we want to do here at the Dale Center -- not just write cutting edge history for a limited scholarly audience, but write in a way that reaches out and touches a broader community, including those who served in these wars and serve in the military today."

Dr. Kyle Zelner, chairman of the Department of History and a senior fellow in the Dale Center, said Wiest's book "is an engrossing account of a group of men and their families who were, at the same time, both typical and extraordinary in a time of war."

"The making of the book into a major documentary film is a tribute to the work Andy did to rediscover the story of these American soldiers and bring it back to life in the pages of his book," Zelner said. "The faculty in the History Department and the Dale Center  are extremely proud of his scholarly accomplishments and proud to have such a brilliant scholar and author as a colleague and friend.”

To learn more about the Dale Center and the research of Dr. Wiest, visit the Southern Miss Department of History at www.usm.edu/dale-center or email andrew.wiestFREEMississippi.