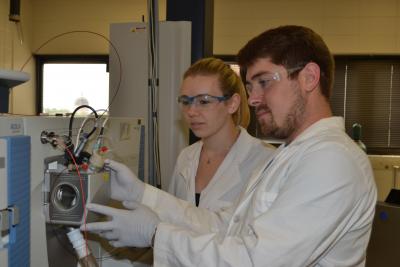 Kathryn Kellett and Hugh Broome work at a mass spectrometer in the Department of Chemistry and Biochemistry. (Photo by Tara Burcham)

Kathryn Kellett, a doctoral student at the University of Hertfordshire, United Kingdom, recently completed a research collaboration with University of Southern Mississippi researchers Dr. Karl Wallace and graduate student Hugh Broome in the Department of Chemistry and Biochemistry.

The Churchill trust provides travelling fellowships to British citizens in order to “provide opportunities for British citizens to go abroad on a worthwhile enterprise of their own choosing, with the aim of enriching their lives by their wider experience, through the knowledge, understanding, and/or skills they gain, and, on their return, enhancing the life of their community by their example and the dissemination of the benefit of their travels.”

Kellett's research involves the detection of legal highs -- substances designed to produce the same, or similar effects, to drugs such as cocaine and ecstasy, but are structurally different enough to avoid being controlled under the 1971 Misuse of Drugs Act.

Kellett is working to develop sensors to aid in speedy determinations of the presence of new designer drugs. “These drugs are changing every day. They are created in laboratories and are stimulants, such as mephedrone,” she said.

“Oftentimes these drugs are not ‘illegal' because their chemical structure has been changed and they are so new. But, they are still often abused. An example is bath salts. Although sold as a beauty product, they were abused as illicit drugs. Our goal is to find a way to quickly test for the presence of these designer drugs,” said Kellett.

Kellett says she is working toward developing a sensor that can be used in the field. “It is not something you would have to use in a lab. We are trying to make it accessible for law enforcement and health care professionals to easily identify the substance without any complicated equipment,” she said.

The research targets molecules that are novel drugs; they mimic drugs similar to ecstasy and heroin. “Essentially, users take a formula of an illegal drug, alter it a bit, and it becomes legal. It is hard for the laws to stay ahead of these drugs since they are constantly being altered,” said Kellett.

Kellett and her major professor, Dr. Jacqueline L. Stair, senior lecturer in analytical chemistry at the University of Hertfordshire, needed someone who could aid them in designing sensors to detect the presence of the drug. That person was Wallace, associate professor of inorganic and supramolecular chemistry at Southern Miss.

“Karl and I had worked together before, and Katy and I saw a need for an expert in supramolecular chemistry, and that's Karl's expertise,” said Stair.

Stair says that at this time, there are only traditional tests for drugs that can be expensive and take time to get results. “There are 600-plus legal highs with two new ones coming out each week. There needs to be a better way to test for these molecules,” she said.

Broome, a Southern Miss doctoral student, collaborated with Kellett. “I designed sensors based on Katy's protein modeling and theoretical calculations. The collaboration will continue as I finish synthesizing the second chemosensor and rely on Katy for testing with the drug,” said Broome.

Broome explains that supramolecular chemistry is the study of interactions between molecules. Kellett creates a model of the sensor then Broome and Wallace work to create that sensor. “We take those interactions and try to make a synthetic receptor that can show the presence of the molecule. Change in color can possibly signal a presence,” said Broome.

“The ultimate goal is a disposable method, similar to a pregnancy test, that would show a green line that shows the presence of these legal highs,” said Broome.

The project in ongoing. Kellett and Stair create the modeling and send their work to Wallace and Broome to work on a design to create a molecule that can detect the presence of the drug. “It is a continuous loop. We work back and forth continuously trying to improve our design,” said Wallace.

Wallace says this collaboration between the University of Hertfordshire and Southern Miss is a first. “However, we hope to continue working on this problem and even expanding our research.”

For more information about the department of chemistry and biochemistry, visit http://www.usm.edu/chemistry-biochemistry.