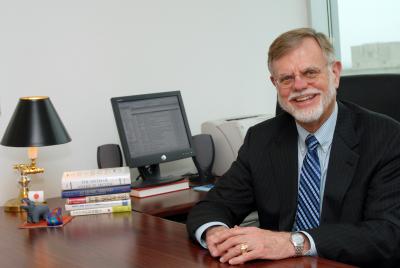 As an expert on U.S. foreign policy and international politics, former White House senior staffer, Dr. Henry Nau, has been all over the world. On Feb. 23, however, he is coming home to Hattiesburg where his roots are deep at The University of Southern Mississippi.

His father, Dr. John F. Nau, was the first chaplain at Southern Miss, where he taught for 26 years before retiring. He was also instrumental in the establishment of the Department of Philosophy and Religion and served as its first chair for 17 years. To honor the memory and legacy of their father, the children of Dr. Nau will make a donation to the John F. Nau Endowment in Philosophy and Religion.

“My father was a minister and teacher. He made very little money in his lifetime,” said Henry Nau. “But he was emphatic that if anything was left over after his death and his wife's death, he wanted it to go to his beloved Department of Philosophy and Religion at Southern Miss.”

Henry Nau will present at a special lecture at 6:30 p.m. on Monday, Feb. 23, at the Osher Lifelong Learning Institute at the Peck House, located at 3601 Pearl Street. Nau will discuss his thoughts about current American foreign policy and his father's legacy at the lecture -- a partnership between the Department of Philosophy and Religion and Osher Lifelong Learning Institute. The event is free and open to the public.

Henry Nau grew up in Hattiesburg and graduated from Hattiesburg High School. He holds a B.S. degree in economics, politics and science from Massachusetts Institute of Technology and M.A. and Ph.D. degrees from The Johns Hopkins University. He is currently a professor of Political Science and International Affairs at The George Washington University, where he also serves as director of the U.S-Japan-South Korea Legislative Exchange Program.

From January 1981 to July 1983, he served on President Reagan's National Security Council as senior staff member responsible for international economic affairs. He has also published a number of articles and books, including his latest, “Conservative Internationalism: Armed Diplomacy under Jefferson, Polk, Truman, and Reagan.”

“My book is about American foreign policy and raises the timely question of whether America, after difficult experiences in Afghanistan and Iraq, is returning to an isolationist approach toward the world,” explains Dr. Henry Nau.

“We are honored to welcome Dr. Henry Nau home to Southern Miss and join him in paying tribute to his father, Dr. John Nau, who was a man of high ideals, excellent character and a great friend to the University,” said Dr. Steven R. Moser, Dean of the College of Arts and Letters.

“We also are pleased to have someone of Dr. Henry Nau's stature in international politics and economics to share some thoughts with the Southern Miss and Hattiesburg community,” Moser added.