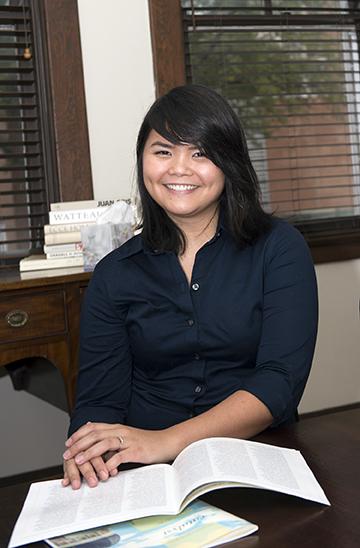 University of Southern Mississippi graduate student Dahlia Amato has been selected as a finalist for the prestigious Paul & Daisy Soros Fellowship. (Photo by Danny Rawls)

Dahlia Amato, a second-year doctoral student at The University of Southern Mississippi, has been selected as a finalist for one of the prestigious Paul & Daisy Soros Fellowships for New Americans.

Amato, a native of Jakarta, Indonesia, is pursuing her doctorate in polymer science under the tutelage of Dr. Derek Patton. She is one of only 77 applicants chosen as finalists from approximately 1,200 applicants nationwide. Thirty fellowships will be awarded in March. Amato is the first Southern Miss student to become a Soros Fellowship finalist.

“I was thrilled, excited and humbled to be included in the group of finalists selected for the fellowships,” said Amato, who has earned permanent residence status in the U.S. through her marriage to husband, Doug Amato, in 2012. “Getting to this stage in the process is definitely an accomplishment, but it would be even more amazing and gratifying to actually win one of the fellowships.”

The next step for Amato is to appear before two different interview panels next month in either Los Angeles or New York City. Robyn Curtis, National Scholarships and Fellowships officer at Southern Miss, is helping Amato prepare for the crucial interview process.

“Right now we're mainly focusing on just making sure she is comfortable talking about herself and her story,” said Curtis. “I think Dahlia's story is very inspiring and speaks very directly to the Soros criteria. She overcame significant hardship to make her way to the United States and she has accomplished an incredible amount in a very brief period of time.”

Paul and Daisy Soros, Hungarian immigrants and American philanthropists, established their fellowship program for New Americans in December 1997 with a charitable trust of $50 million. The Soros wished to give back to the country that had afforded them and their children such great opportunities and felt a fellowship program was an appropriate vehicle. They also felt that assisting young New Americans at critical points in their education was an unmet need.

At the time of their selection, Soros Fellows must be college seniors or early in the graduate programs for which they request support. Each Fellow receives tuition and living expenses that can total as much as $90,000 over two academic years. Fellows are selected on the basis of merit – the specific criteria emphasizes creativity, originality, initiative and sustained accomplishment – in annual national competitions.

Amato first came to the U.S. as a high school student through the AFS-YES (American Field Service – Youth Exchange Student) program. She attended one year of high school at Templeton High (California), before graduating from 70 Jarkarta High School in Indonesia.

The road to a doctoral degree led Amato to Hattiesburg and The University of Southern Mississippi's renowned polymer science program.

“In the field of polymers there aren't many programs anywhere that rank higher than USM's,” said Amato. “And I could not ask for a better mentor than Dr. Patton. He supports me 100 percent and really encouraged me to apply for the PD Soros Fellowship.”

Amato has a strong desire to acquire her U.S. citizenship and continues to move ever closer to realizing that dream.

“The kindness that Americans have shown me is something that I hope to repay throughout the rest of my life,” she said.

For more information about scholarships and fellowship opportunities at Southern Miss, contact Robyn Curtis at 601.266.4263.