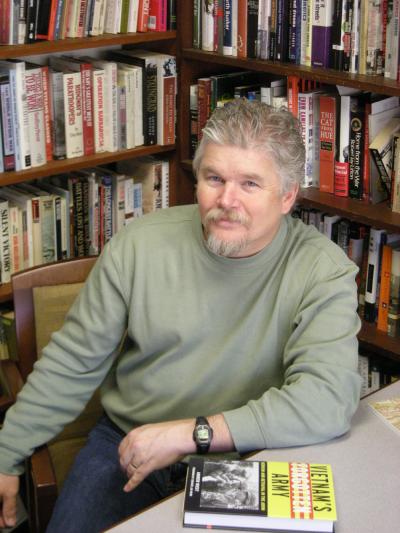 Andrew Wiest fondly recalls his mom taking him and his siblings to see the annual University of Southern Mississippi homecoming parade. He dreamed of one day becoming a member of the University's Pride of Mississippi Marching Band, an important participant in the parade's lineup.

“When I was a kid, I just knew I had to be in that band,” said Wiest, a professor in the Southern Miss Department of History. “Then, when I was a student at USM, I marched in that parade as a drummer in the band.”

Wiest moves up in the pecking order of the Southern Miss Homecoming Parade lineup Saturday, Oct. 17 when he serves as its Grand Marshal. The popular professor was recently selected by the University's student homecoming committee to serve in that important role.

“Now I get to ride in a car in front of the band,” Wiest said. “How cool is that?

The parade begins at 11 a.m. and travel east down Hardy Street from the University Mall parking lot to the main entrance of the campus. Other parade celebrities will include Hannah Roberts, a Southern Miss alumna and first runner-up in this year's Miss America Pageant; and Pro Football Hall of Fame member Ray Guy, who was an All-American punter at Southern Miss and only kicker to be selected in the first round of the NFL Draft.

Wiest holds a bachelor's and master's degree from Southern Miss, and a Ph.D. from the University of Illinois, Chicago. The founding director of the University's Dale Center for the Study of War and Society, he is an internationally known expert on the Vietnam War. He is a recipient of the College of Arts and Letters' Charles W. Moorman Distinguished Alumni Professorship in the Humanities, and a member of the University's Alumni Hall of Fame. His book, The Boys of 67: Charlie Company's War in Vietnam is the inspiration for the Emmy Award-nominated National Geographic documentary Brothers in War.

“Dr. Wiest is a model professor at USM. He cares about the students, the school and Hattiesburg,” said Andy Burleson, a student who serves on the University's homecoming committee.

“Everyone that comes to Southern Miss hears that they have to take a class from Dr. Wiest at least once before they graduate. I'm glad I had him as a professor my freshman year, and that he can represent the University in this manner.”

Samantha Taylor, a doctoral student in history at USM, said Wiest is a great mentor and teacher. “It's going to be a really good parade with him as grand marshal,” Taylor said.