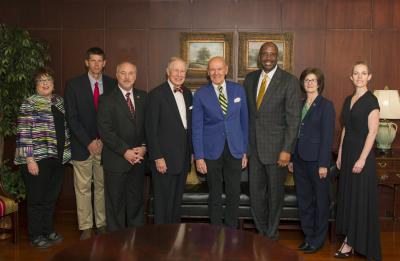 Richard Peck, an award-winning author of books for middle grade students and young adults, recently made a gift of $100,000 in support of The University of Southern Mississippi's Fay B. Kaigler Children's Book Festival and de Grummond Children's Literature Collection.

Among Peck's works are A Year Down Yonder, for which he earned a coveted Newberry Medal, and The River Between Us. He is also the recipient of the Margaret A. Edwards Award from School Library Journal, the National Council of Teachers of English/ALAN Award, and the 1991 Southern Miss Medallion from the Kaigler Children's Book Festival.  He gave the festival's Ezra Jack Keats Lecture in 2000 and deGrummond Lecture in 2010.

Karen Rowell, coordinator of the Children's Book Festival, said in addition to supporting the de Grummond Collection, Peck's gift will help defray registration and travel costs for some regular attendees of the festival whose sponsors have budget challenges involving travel expenditures.

“We have a dedicated group of librarians and teachers from the Southeast region and beyond who, because of budget shortfalls, sometimes find it difficult to attend. However, Mr. Peck's generosity will make it easier for professionals or followers of children's literature make their way to the Festival,” Rowell said.

“While our list of keynote authors and featured speakers is an important part of every Festival, the number and variety of attendees is just as important for making it work. Without them, half the discussion would be missing.”

This year's book festival is set for April 6-8. The 50th anniversary of the de Grummond Children's Literature Collection will also be recognized during the festival, with 2003 Medallion winner Lois Lowry giving the de Grummond Lecture. The 100th birthday of famed American writer and illustrator Ezra Jack Keats (1916-1983) will also be celebrated with a special Centennial Keats Lecture given by Deborah Pope at the Keats awards ceremony and luncheon April 7.

For more information about the Children's Book Festival, visit http://www.usm.edu/childrens-book-festival.