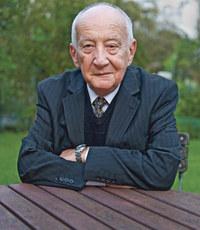 A Holocaust survivor aided by a unit of African American soldiers from Mississippi will be in Hattiesburg Tuesday, Feb. 23 to speak at the screening of a documentary detailing his ordeal as a prisoner of the Nazis near the end of World War II.

Leslie Schwartz' story of survival and freedom, captured in “The Mühldorf Train of Death” will be shown at 6:30 p.m. in The University of Southern Mississippi International Center, room 101. German television produced the documentary on Schwartz, which focuses on his interaction with a group of high school students trying to learn about and honor survivors of the Holocaust. Admission is free.

Schwartz was imprisoned at age 14 near the end of the war and managed to elude death, but lost his entire family in the gas chambers at the infamous Auschwitz death camps. He will participate in a question and answer session at the screening. Earlier in the day, he will attend a pre-screening reception at Hattiesburg's African-American History Museum and also share his story with students in a USM history class.

Dr. Andrew Wiest, professor of history and founding director of USM's Dale Center for the Study of War and Society, said Schwartz's visit came about following a conversation between the two about holding a screening of the film in Hattiesburg.

“Leslie contacted us to set up the event, and when I asked him ‘Why here?' I had figured he wanted to come because of the Dale Center and our expertise,” Wiest said. “But, actually, that was not the case. Instead he told the story of first being liberated (from the concentration camp) by and then being helped at a displaced persons camp by soldiers from Mississippi.

Dr. Rebecca Tuuri, assistant professor of history at USM, said Schwartz will meet with students in her African American history class earlier in the day to describe his tragic experience in the Auschwitz, Dachau, and Mühldorf concentration camps and the valor of the American soldiers who took care of him after he was freed.

“Historians of African American history often stress the importance of black veterans in leading the mid-20th century Civil Rights Movement once they returned home, but too often scholars neglect to focus on what these men did while serving overseas,” Dr. Tuuri said. “Mr. Schwartz's visit to my class will help students see the profound impact that African American soldiers had while fighting for justice and humanity not only here in America, but also in Germany. He will also offer my students a chance to see how a foreigner, who had been directly helped by African Americans, viewed American racism in the 20th century.”

Schwartz will meet with African American veterans of WWII during the pre-screening reception at the museum, which previously served as a United Services Organization, Inc. (USO) facility for African-American soldiers serving in the segregated U.S. military. USOs provided morale and recreational services to uniformed military personnel in wartime.

Wiest said it will be “thrilling” to see Schwartz celebrate the soldiers' part in the war after so many years.  “Leslie's visit will feature history, remembrance, thanks and healing,” Wiest said. “What a great way for our students and community members to learn - and to learn of a past that was both troubled and promised.”

Supporters of Schwartz' visit include the USM Department of History; College of Arts and Letters; Department of Interdisciplinary Studies; The Center for Black Studies; Center for Oral History and Cultural Heritage; the African American Military History Museum; and the Mississippi Armed Forces Museum.

For more information, contact the Southern Miss Department of History at 601.266.4333. To learn more about the African American History Museum, visit http://www.hattiesburguso.com/index.cfm/african-american-military-history/.