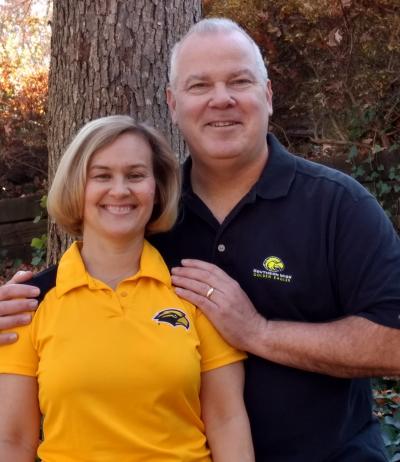 Angie and Rick Walker are the first husband-wife team to enroll in the Human Capital Development doctoral program at Southern Miss. (Submitted photo)

Call it craziness, or call it stubbornness. But you should also call it “impressive” when referring to the accomplishments of husband-and-wife graduate students Rick and Angie Walker, who will receive their doctoral degrees during The University of Southern Mississippi's Fall 2017 Commencement on Friday, Dec. 8.

The couple, both employed by the U.S. Navy, somehow managed to juggle demanding, full-time jobs, and two teenagers at home with a rigorous doctoral program in Human Capital Development (HCD) through the University's Gulf Park campus in Long Beach. But why did they decide to chase such a lofty goal at the same time?

“Naiveté I think,” said Rick, who works as a Navy civilian after 23 years of active duty. “Earning a Ph.D. is a very tough task for anyone, and we certainly bit off a lot in trying to complete the degree, manage two full-time careers, and keep the family going. Angie and I are very stubborn individuals, so I think we just never considered that we might not finish.”

Her path toward a doctorate started rather innocently and without a structured plan.

“I actually enrolled in one of the HCD courses – Survey Designs – as a non-degree seeking student to learn more about the subject, so that I could better write surveys for the Navy,” she said. “While enrolled, I just really enjoyed the class and the engagement of the professor (Dr. Patti Phillips) and students. The learning environment was, well, contagious. I just wanted to continue doing it.”

So much so that she made the life-changing decision to take on the ultimate academic challenge. Though it has taken almost a decade to reach her goal, Angie harbors no second thoughts.

“It really wasn't until my Ph.D. classes that I discovered I truly enjoyed learning,” she said. “I absolutely loved my HCD classes. I enjoyed the student comradery, the networking, the professors, the subjects, the classroom engagement, and the blended learning environment.”

A native of Fort Myers, Fla., Rick Walker earned his undergraduate degree in Business Administration from the University of Florida (1992) and his master's degree in Management from the Naval Postgraduate School (1999). One year after watching his wife take the doctoral plunge, Rick decided to test the waters himself.

“I was never really interested in earning a Ph.D., but I had a difficult transition when I retired from the Navy in 2006,” he said. “We moved from Jacksonville, Florida to Gulfport and then relocated to Pass Christian during the full brunt of (Hurricane) Katrina recovery, so finding a job was not easy. I saw the degree as a way to broaden my resumé beyond my military experience.”

The Walkers are the first husband-and-wife duo to enroll in -- and complete -- the HCD doctoral program. Dr. Heather Annulis served as chair of Angie Walker's dissertation committee.

“We are so excited to see them complete this academic milestone together. Family support is certainly a key ingredient in their Ph.D. achievements,” said Annulis.

Annulis says that Angie Walker's resiliency, integrity, and determination helped pave the way to her successful completion of the rigorous program.

“She represents our country as one of very few women achieving the rank of captain in the U.S. Navy, and I know she will represent Southern Miss with the same level of character,” said Annulis. “Her cutting-edge research in the area of increasing female officer retention is essential for human capital development in the military.”

The Walkers, who have been married for 22 years, are the parents of a 13-year-old son, Griffin, and 15-year-old daughter, Sydney. Angie currently serves as Director,

Rick Walker acknowledged that the road to doctoral achievement featured its share of potholes, including two mild strokes he suffered during the process. But he emphasized that the “highs” of the journey far outweighed any “lows.”

“At the risk of sounding flippant, our challenges have just been what they've been,” he said. “Everyone has obstacles to overcome, and we've been successful at facing ours, choosing a path, and moving on. So many things in life are a choice, and we choose to make our life work. Others may not follow the path we've been on, but this one is ours and so far, so good.”

Angie Walker points out that teamwork played a vital role in the time-consuming doctoral process. During her participation in the program, the family moved three times, she received two job promotions and transitioned between seven different job titles.

“If I had a paper due or needed to study, Rick would take the lead in the home and was responsible for cooking dinner, cleaning, getting the kids' homework done, and putting them to bed in the evenings,” said Angie. “And if Rick had class requirements, I took the lead.”

And what about those times when both had important assignments due?

“Well maybe we ate take-out, the house didn't get cleaned, and we each took turns taking a break from our schoolwork to focus on the kids,” she said.

Dr. Cyndi Gaudet, chair of the HCD Department, explained that the doctoral program is delivered in executive format, a blend between face-to-face and synchronous online instruction. The research-based, practitioner-focused program attracts students interested in learning how to make critical, evidence-based decisions about human capital investments.

Gaudet served as chair of Rick Walker's dissertation committee and noted how he effectively integrated his military and government experience with contemporary human capital development strategies and solutions.

“Rick established a reputation as a student consistently prepared, a leader engaged with peers and professors, and a valued contributor to the HCD community of learning and practice, which I observed as his doctoral advisor. We wish both Dr. Walkers continued success in future endeavors,” said Gaudet.

After 25 years in the Navy, Angie has submitted a request for retirement next year. Rick says the family hopes to relocate soon to the Gulf Coast area near family. And both plan to put their prestigious doctoral degrees to the best use possible.

“After 35 years of drawing a Navy paycheck, I'm ready for something new,” said Rick. “I'm hoping to find a position on faculty somewhere teaching subjects like management and organizational leadership. My long-range goal is to simply make a difference with people.”

Angie eagerly awaits the opportunity to start a new chapter in life.

“I'm interested in working as a human capital executive, a strategic workforce manager, or a leader of diversity at a college or small-to-medium-size company/organization to help figure out how to lead and manage the current workforce and that of the future,” she said.

Call them both Dr. Walker from now on. And be sure to call them “impressive” while you're at it.