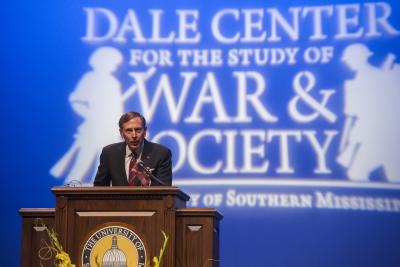 Winning the war on terror and advancing democratic ideals around the world cannot happen on the cheap or with quick fixes, but rather with a sustained commitment to those goals and implementation of sustainable strategies with global partners.

That was the assessment given by retired Army Gen. David Petraeus, former commander of the Surge in Iraq and U.S. Central Command and former director of the Central Intelligence Agency (CIA), of how America needs to approach foreign policy goals going forward in his 2017 Lt. Col. John H. Dale Distinguished Lecture in International Security and Global Policy, given Sept. 26 at the historic Saenger Theater in downtown Hattiesburg.

The event was presented by The University of Southern Mississippi's Dale Center for the Study of War and Society.

“You can't just drone strike and Delta Force your way to victory” against the Islamic State and Al Qaeda, Petraeus said, emphasizing that the way to turn the tide against terrorism, especially in the Middle East and North Africa, will be for America to commit to what he believes is a “generational” struggle against extremists exploiting leadership vacuums in “ungoverned spaces.”

The U.S. and its allies have to recognize that in the Middle East a “What happens in Vegas, stays in Vegas” mindset won't work, as the problems there inevitable spread far beyond that region. “What happens doesn't stay there,” Petraeus said. “You have to do something. And in most cases, the U.S. has to lead,” while working with allies and citizens to transition nations crippled by terrorism to security and stability.

In the decade that followed the Sept. 11, 2001, terrorist attacks on the U.S., Petraeus commanded coalition forces in Iraq and Afghanistan, as well as in the greater Middle East and Central Asia. After his retirement from the military, Petraeus served as director of the CIA from 2011 to 2012.  He is now a partner in a global investment firm and chairman of the firm's Global Institute, and remains engaged in U.S. foreign policy and international security issues as a visiting professor at several universities and a frequent media contributor on security topics.

Petraeus also said he's encouraged, despite rhetoric from the 2016 U.S. presidential campaign, that President Trump shows signs of embracing America's longtime role as a global leader and mainstay of post-WWII institutions such as NATO. He praised the president for choosing former military colleagues with whom Petraeus was privileged to serve in Iraq and Afghanistan, including James Mattis (Secretary of Defense), H.R. McMaster (National Security Advisor) and John Kelly (Chief of Staff) for prominent roles in his administration.

Dr. Heather Stur, a USM associate professor of history and a Dale Center Fellow, said "Gen. Petraeus is one of the architects of 21st century U.S. foreign policy and military strategy, and we in the Dale Center are so proud to have been able to bring him here to speak with our students and the broader community about the wars in Iraq and Afghanistan, and issues of international security that remain crucial concerns in our world today."

The Lt. Col. John H. Dale Distinguished Lecture in International Security and Global Policy lecture series is presented by The University of Southern Mississippi Department of History's Dale Center for the Study of War and Society. The lecture series honors the late Lt. Col. John H. Dale, a decorated military veteran of World War II and the Korean War, who earned his master's degree from USM and was a professor of military studies for the University's Reserve Officer Training Program. The lecture series is made possible by the generous support of Lt. Col. Dale's daughter, Dr. Beverly Dale.

For information about the USM Department of History and The Dale Center for the Study of War and Society, visit https://www.usm.edu/war-society.