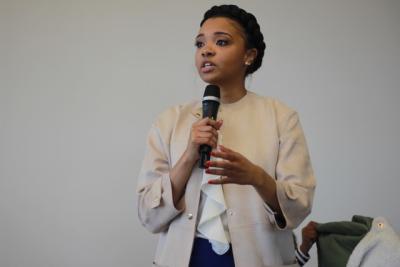 Sheena Allen knew the Silicon Valley CEO stereotype when she moved out west a few years ago. She knew that stereotype looked very little like her. She came from a different place and did not receive an Ivy League education.

She knew those differences could be — in marketing speak — her unique selling proposition. And it was clear that Sheena Allen Apps was never going to be the typical Silicon Valley tech company.

“Most people, especially in the tech world, they go to Harvard, or they go to Stanford,” said Allen, a Terry, Mississippi, native, who graduated from The University of Southern Mississippi (USM) in 2011. “I'm different. So when I'm in Silicon Valley and they ask, ‘Where did you go to school?' For me, it was a gift. When you come from somewhere, and you are different from everybody else, everybody looks at you twice. They give you that second look. If they are going to look at me twice, I'm going to give them something to look at.”

Today, millions of people are looking at her work. Her third app generated a half-million downloads in a just a few months, and today her new company, Cap Way, aims to connect people in underserved areas to financial literacy tools and traditional banking.

“There are 3 billion people in this world who do not have access to traditional banking,” she said. “Will I be able to touch all 3 billion? No, but just to be able to change the lives of the next generation when it comes to their financial future will be huge.”

Allen's passion for this work comes from her life experiences in big cities across the country and back home in small towns across Mississippi.

“Growing up, a lot of my family were considered low-income. They live in trailers, and they used check-cashing places and pay day lenders. I knew their world very well,” Allen said. “When I left the state, it was an entirely different world. I went to Silicon Valley. I stayed in Austin for a while, and everywhere I looked were banks; I didn't see pay day lenders or check-cashing places. I remember coming back home to Mississippi to visit family for the holidays, and I noticed my friends and family and people in my community were still going to check-cashing places and still cashing checks at the grocery store.”

The memory stuck, and Allen intends to use technology to disrupt what she describes as the “predatory economy.”

“I want to give not only my family, but people I know in that same position, a much better and brighter financial future,” Allen said. “That's what started Cap Way. It really started out with really trying to change something for the better.”

The app serves two functions — the first is providing financial education and the second is connecting users to financial services.

“We feature short videos, articles, money facts and conduct programs through partners like schools, financial institutions, employers and community-based organizations,” Allen said. “The other part of the app allows you to either link an account or to create an account within the Cap Way application. The algorithm evaluates your financial literacy, financial behavior, financial data, and creates a financial health score for you.”

Learning Along the Way

Today, Allen's heart is back in the Magnolia State, as she aims to make a difference in her home state. Her ability to assist Mississippians has been grounded in her education there and refined by lessons learned across the country.

At USM, she double-majored in psychology and film, minoring in marketing. Her senior year, she developed an idea for an app and created Sheena Allen Apps.

“I gave myself one year,” she said. “I said if I don't find success in this tech thing, I want to go to grad school. Within that year, I put out my third app, and it did about half a million downloads in three months. That company took me from Mississippi to Silicon Valley, and that's where I started my journey into the tech world.”

Along the way, she found mentors who helped her overcome her fears about entrepreneurship. And today, she's been featured in Essense, the Huffington Post, and many other national publications.

“Mentors are huge to the journey,” she said. “I think I took 10 leaps forward when I finally started talking with mentors; but at the same time, all advice is not the best advice, and sometimes you have to go with that gut feeling.”

“I think a lot of people have this issue with fear,” she added. “It's like, ‘Do I quit my job? Should I start it? It probably won't work.' The first step is usually the hardest, but it's without question the most rewarding. The entrepreneur's journey is not easy. I think that if it was easy, everybody would do it. There's a reason that most people have a 9-to-5 versus being an entrepreneur. Sometimes you don't know where your next meal is coming from. I don't know where my next dollar is coming from — especially in those early days — but if you are truly passionate about it, all of the hardships and all those lonely nights and the sacrifices are well worth it at the end of the journey.”

And when her journey as an entrepreneur ends, she hopes to have made a difference for the Mississippians she knows and loves.

“It's not even just the financial peace,” she said. “If I can change someone's mindset for the better, to me, I did a good job.”