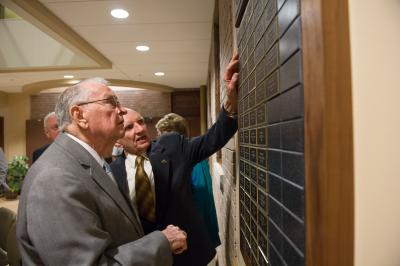 A new plaque listing the names of each former president of the Southern Miss Alumni Association now hangs in the USM Foundation Atrium of the Ogletree House.

“While it is always energizing to spend time with those who have invested their time in our organization, this event was especially gratifying as it provided unique opportunity to recognize our former volunteer leaders in a special way,” said Jerry DeFatta, executive director of the Southern Miss Alumni Association.

During the event, DeFatta shared a brief presentation of the history of the Association and highlighted the significant contributions made by the Association over the past 100 years.

The Southern Miss Alumni Association was founded on May 4, 1917, and began advocating on behalf of the institution almost immediately as the organization launched an effort encouraging the state of Mississippi to pass legislation allowing the college to grant baccalaureate degrees. A bill was signed in 1922 and Kathryn Swetman of Biloxi received the first bachelor of science degree that same year.

“While legislative advocacy has been a hallmark of our work from the very beginning, the Association has also been heavily engaged in the development of traditions that surround many of our University's most notable events and generating funding for Southern Miss students,” said DeFatta.

In 1998, the Association created the Legacy Scholars Endowment to provide one-time, $1,000 scholarships to select children and grandchildren of Southern Miss alumni. This year, in honor of the 100-year anniversary, the Association made a $100,000 investment to the program now known as the Robert D. Pierce II Legacy Scholarship awarding a record number of 100 scholarships to incoming 2017 freshmen.

Concluding the event was the unveiling of a new plaque listing the names of each former president of the Southern Miss Alumni Association. The plaque is proudly displayed in the USM Foundation Atrium of the Ogletree House.