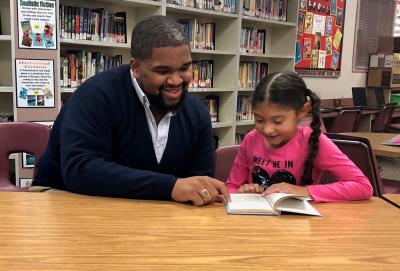 Southern Miss alumnus Brandon Hersey is a Truman Scholarship winner who has taken an active role in the Teach for America program.

“The work I do reflects my commitment to the belief that our purpose is to alleviate the hardships of our fellow man and to give back to the communities in which we live. This ideal is the core of my being and the driving force in my life and work.”

Building upon and expanding the community service platform he presented during his interview for the Truman Scholarship in 2013, four years later, Hersey continues to uplift his African-American community and other ethnicities of color through mentorship.

"Brandon started on day one giving to Southern Miss. Student involvement and development have been his hallmark,” said USM Dean of Students, Dr. Eddie Holloway. “He was a crown jewel as a student and has made us proud. And, we continue to look forward to his future development, involvement and civic service."

After leaving Hattiesburg, Hersey spent two years in Washington, D.C. as a Truman-Albright Fellow for the Department of Health and Human Services in the Office of Planning Research and Evaluation under the Obama Administration and later as a Truman-Democracy Fellow, speaking with other Truman Scholars who had run for elected office and learning from their experiences.

In 2016, he relocated to Seattle, Wash., to pursue new opportunities as a Teach for America Corps member, where he works for the Federal Way Public School District as a primary educator. His decision to transition from social services policy to education derived from a desire to acquire an array of experiences to fully understand the populations he plans to serve.

“I've always been interested in Teach for America. I come from a long line of educators from my sisters, to my late mother, going all the way back to my great aunt,” he said. “My experience with Teach for America has been truly transformative.”

Founded in 1989, Teach for America is a nonprofit organization whose mission is to enlist, develop and mobilize as many as possible of the nation's most promising future leaders to grow and strengthen the movement for educational equity and excellence.

During his first year as a Teach for America educator, Hersey said that he was the only African-American teacher at his school, serving a student population of nearly 60 percent African-American and Latino students.

While in Seattle, Hersey has taken steps toward engaging young students of different ethnicities through extracurricular activities and mentorship programs. Founder of the “Culture Club,” Hersey created an after-school program for all girls and boys at his school that offered a space to celebrate the various cultures represented in the student body in a way that had not been done before.

Hersey, also a proud Eagle Scout, mentors youth of color as an assistant scoutmaster for Troop 008 based in the Rainier Beach Neighborhood of Seattle. Led by four black Eagle Scouts, Troop 008 exclusively serves boys of color in an urban area, allowing them the opportunity to tailor the message and traditions of the scouts to be more responsive to the needs and tenets of cultures of color.

“Mentorship has been a cornerstone of African American culture for centuries”, said Hersey. “I'm just glad I've been able to develop a platform to share my experiences and encourage other young black men. It's incredibly important and it's absolutely central to the work I do.”

Because of his substantial record of leadership and service made over the years, especially while in Seattle, Hersey was recently selected as a 2018 Henry Jackson Leadership Fellow by the Jackson Foundation. He is one of nine scholars from Washington chosen for the fellowship class.

Named after U.S. Sen. Henry M. Jackson of the state of Washington, the Henry M. Jackson Leadership Fellows Program is an initiative that invests in the leadership development of highly-qualified young professionals. The program commits to developing thoughtful next generation leaders to foster a bipartisan approach to challenges in the fields of international affairs, human rights, environment and natural resources management, energy, and public service.

Informed about the fellowship through a friend and fellow Truman Scholar, Hersey said that the Henry Jackson Leadership Fellow would help him pursue his professional goals in a number of ways and help build upon the initiatives he's already set forth.

“It seemed like a great opportunity to become more familiar with the nuances of the problems facing the Seattle area. I hope to learn all I can from leaders and other change agents in the Washington area in order to better serve my students and community,” he said.

Robyn Curtis, director of nationally competitive awards for The University of Southern Mississippi, said that after reading the biographies of Hersey's other cohorts, she was struck by his accomplishments and how amazing it was for him to be recognized as a peer of these incredibly accomplished leaders and scholars.

Curtis, who has assisted Hersey with scholarship opportunities since he was a sophomore, continues to support the alumnus' endeavors to this day, even beyond his time at Southern Miss. For the Jackson Leadership Fellow, she served as a recommender and assisted him with his fellowship application.

“Brandon has made a tremendous difference at his school and community in a relatively short time in Washington state. I know his participation in the Jackson Fellows Program is going to provide another wonderful step forward in his development. He is incredibly passionate about education and is an excellent role model, particularly for the young students of color at his school,” said Curtis. “I am confident he will continue to make a difference in his community and beyond.”

When asked about his future goals, Hersey indicated that he intends to apply for the Master of Public Policy program at Harvard University, a graduate degree he will pursue using his Truman Scholarship. Ultimately, he sees himself influencing national education policy or working in educational administration, working with high-need students or pupils dealing with high levels of trauma. With his degrees in political science and communication studies from USM, along with his experience as an educator, Hersey said he has the groundwork and context necessary to authentically represent underrepresented students and teachers.

“I hope others see me as an example of what's possible with a lot of determination and even more luck. I see myself as a testimony of what a poor black boy, a product of Hattiesburg Public Schools, can do not only for his community but communities across the country and world,” said Hersey.