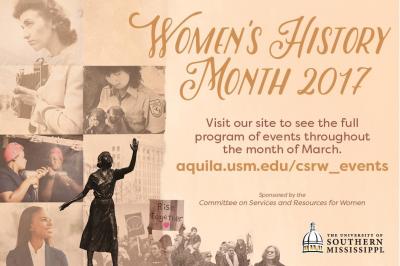 To mark Women's History Month in March, The University of Southern Mississippi's Committee on Services and Resources for Women (CSRW) is coordinating a series of free events that includes lectures by nationally renowned scholars and authors, panel discussions of prominent women in the community, workshops by experts in various fields, and theatrical and musical performances, among others.

Women's History Month 2017 events at USM include the following:

*“In Memory of Light: The Photographs of Diane DeCesare Ross” - Photographic Exhibit, Department of Art and Design through March 10, Cook Library Exhibit Gallery

This photography exhibit captures moments of light, vision and life. Every photograph is a memory of light, a memento lumina. Whether the image is a child caught in the wonder of an aquarium, a view of the ground from an airplane, or a detail from a luna moth wing, the viewer is invited to pause and perhaps see the world in a different way.

This lecture examines the lives of Gertrude Stein and Peggy Guggenheim, who reshaped the landscape of art with their daring choices. They each supported avant-garde artists during the seismic shifts surrounding WWII. The lecture will review images from their collections and examine how their relationships with a few key artists impacted 20th century art.

This movie, starring Denzel Washington and Meg Ryan, portrays the debate over whether to award the Medal of Honor posthumously to a woman U.S. Army captain who was killed in the Persian Gulf War.

Fannye A. Cook was a pioneer among scientists, conservationists, and women. Cook was born in 1889 in Crystal Springs, Miss., when women couldn't vote or serve on juries, and were considered generally unsuited for the serious business of politics and science. Still, none of the naysayers deterred Miss Cook, and may have emboldened her. She was the driving force behind creating the Game and Fish Commission (now the Department of Wildlife, Fisheries and Parks). She founded the Mississippi Museum of Natural Science, led the push to create a system of wildlife management areas and protect the Gulf of Mexico's barrier islands, spent her life researching and teaching, and much more.

• “Annie Peck Smith” - Catharine Bomhold, School of Library and Information Sciences
*“The Evolution of the Role of Women through the Chronology of the USM Dixie Darlings,” March 29, 12-1 p.m., Scianna Hall 1008. Presenter: Allison Gillespie, Office of the Provost, Association of Office Professionals