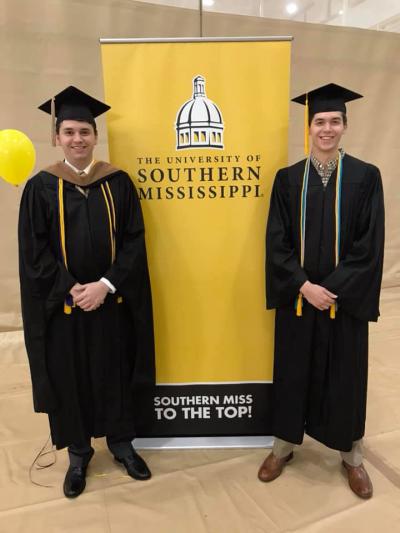 Alden and Field Bennett earned degrees from The University of Southern Mississippi during fall 2018 commencement. They are third-generation graduates of school.

Siblings Alden and Field Bennett earned degrees from The University of Southern Mississippi during fall 2018 commencement, making them third-generation graduates of the school.

The two Oak Grove (Miss.) natives were among approximately 1,200 who were candidates for degrees this semester, becoming alumni of USM's College of Business and Economic Development. Alden earned his MBA, while younger brother Field secured a degree in marketing.

Alden also earned a degree in marketing from the university in 2013, and now serves as an assistant director in the USM Office of Admissions. Both were also Luckyday Scholarship recipients.

“Being able to share the graduation stage with my brother and best friend is truly one of the greatest moment of my life. We have become extremely close since he (Field) chose to attend Southern Miss back in 2014,” Alden Bennett said.

“We have lived together as roommates, helped encourage each other through academic and personal success and difficulties, and we have a special relationship—one in which Southern Miss helped cultivate.”

Field Bennett said having his brother on campus and as a mentor was “a great resource” and expressed gratitude to him for “taking me under his wing and helping me not only succeed in the classroom, but also in the community.

“It was a great honor to walk with him (at commencement) at the same time, and a real blessing to see how the Lord plans things like this.”

“USM has been our home,” Alden Bennett said. “It's been a place of education, work, fun, and growth. Today is another USM milestone for the Bennett family.”