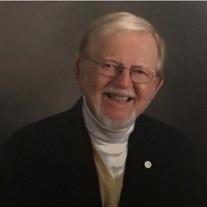 Dr. John D. W. Guice, Professor Emeritus of History at The University of Southern Mississippi (USM), died July 30. He was 87.

A memorial service for Dr. Guice will be held Thursday, Aug. 2 at 2 p.m. at Saint John's Episcopal Church in Laurel, Miss., located at 540 5th Ave., following a visitation set for 1 p.m. at the church. Interment will be Friday, Aug. 3 at 2 p.m. at Old Biloxi Cemetery, located at 1166 Irish Hill Dr. in Biloxi, Miss. Memory Chapel Funeral Homes, Inc. of  Laurel is in charge of arrangements.

A native of Biloxi, Dr. Guice served on the Southern Miss faculty from 1969 until his retirement in 2000, and continued to teach at the university part-time from 2001-2013.  He earned his bachelor's degree from Yale University, a master's degree from the University of Texas-El Paso, and a Ph.D. from the University of Colorado. A veteran of the U.S. Army, he was valedictorian of his Cryptographic School class at Fort Gordon, Ga. and afterward served as a cryptographic specialist with NATO forces stationed in Fontainbleau, France.

At USM, Dr. Guice taught courses in American history, served as director of its American Studies program and as president of the university's Faculty Senate. His research expertise included the history of Mississippi and the Old Southwest; among his publications were The Old Southwest, 1795-1830: Frontiers in Conflict (1989, 1996) and Forrest County General Hospital: The Evolution of a Regional Medical Center, A Prophecy Fulfilled (2002). He was interviewed for the History Channel's “In Search of Meriwether Lewis – Suicide or Murder?” and wrote an introduction to a reprint of a book about the famed outlaw James Copeland, The Confession of James Copeland.

“Dr. Guice was an excellent scholar of the Old Southwest, and contributed valuable insight about the early Mississippi frontier,” Dr. Stephens said. “He always put the needs of his students first, and was beloved by many who learned from him not only in academics, but also how to be respectful of all.”

Dr. Wiest took courses from Dr. Guice as an undergraduate, and later served him as a teaching assistant while pursuing his master's degree at the university.

“John was a true gentleman, always caring, always giving of his time. I was lucky enough to be one of his colleagues for more than a decade,” Wiest said. “After he retired, he would call every month or so to check in and wish me well. He impacted my life greatly, and the lives of so many others. He will be dearly missed.”