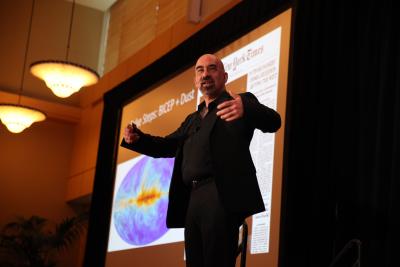 Renowned astrophysicist Dr. David Spergel will share his research into the origin of our universe as the guest speaker for the third annual Rayborn Lecture Series in Physics and Astronomy, set for Oct. 2 at The University of Southern Mississippi's Bennett Auditorium. The free lecture, which begins at 6:30 p.m., is being held in conjunction with the University Forum series sponsored by USM's Honors College.

Spergel is the Charles A. Young Professor of Astronomy at Princeton University and Director of the Center for Computational Astrophysics at the Flatiron Institute. His lecture to USM's audience is titled: “Our Simple and Strange Universe.”

Dr. Chris Winstead, Dean of USM's College of Arts and Sciences, notes that the Rayborn Lecture Series provides the University with an opportunity to bring world-class physicists such as Spergel to the Hattiesburg campus.

“Importantly, these lectures are designed to be accessible to the public and provide the University, local, and regional community an opportunity to hear from some of the best minds in physics today,” said Winstead. “This year's speaker, Dr. David Spergel, is a theoretical astrophysicist who has played a leading role in designing measurements and interpreting data for the age and composition of the universe. He is known as an outstanding science communicator who can make his complex work accessible to those of us who aren't specialists in the field.”

Spergel's observations of the microwave background – the left-over heat from the big bang – have revealed a universe that is both remarkably simple and very strange. He notes that with only five basic numbers, astrophysicists can completely describe all the properties of the early universe and can predict the large-scale distribution of galaxies and matter.

This simple model implies that atoms make up only five percent of the universe and that mysterious dark matter and dark energy dominate our universe. In his lecture, Spergel will describe the evidence for this now-standard cosmological model and subsequent efforts to work with NASA to build a mission dedicated to understanding the properties of dark energy.

Spergel is a member of both the National Academy of Sciences and the American Academy of Arts & Sciences. He received the NASA Distinguished Service Award for his work as chair of the NAS Space Studies Board and the NASA Advisory Council. He is the author of more than 200 scientific papers with more than 100,000 citations.

The remaining Forum series for the Fall 2018 semester will be available via IVN in Hardy Hall 346 on USM's Gulf Park campus.

In 2015, through a generous donation to The University of Southern Mississippi Foundation, Dr. and Mrs. Grayson H. Rayborn established the Grayson H. and Jane Dishong Rayborn Lecture Series in Physics and Astronomy. In 1970, Dr. Rayborn joined the USM faculty and served until his retirement in a distinguished career in teaching, research, service, and administration. During his career, Dr. Rayborn served as chair of the Department of Physics and Astronomy, associate dean of the College of Science and Technology, and director of the School of Mathematical Sciences, as well as professor of physics and astronomy. Upon retirement, in recognition of his distinguished service to the University, Dr. Rayborn was awarded the title of professor emeritus of physics and astronomy.