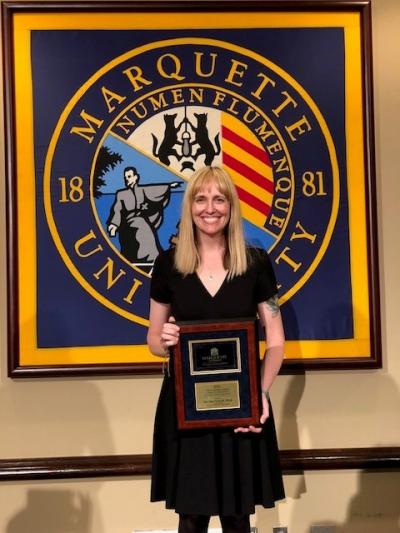 Dr. Heather Marie Stur, associate professor of history at The University of Southern Mississippi, is a recipient of an Alumni National Award from Marquette (Wisc.) University's Diederich College of Communication. Dr. Stur accepted the award during a recent ceremony on the university's Milwaukee campus.

Dr. Stur holds bachelor's and master's degrees from Marquette, and a Ph.D. from the University of Wisconsin-Madison. An internationally recognized expert on the Vietnam War and U.S. Foreign Policy, she joined the Southern Miss faculty in 2008 and is a fellow in its Department of History's Dale Center for the Study of War and Society.

“As an undergraduate student at Marquette, I double-majored in journalism and history, and I've been fortunate to have been able to merge both of my majors into a rewarding career as a historian who routinely writes for blogs, newspapers, and magazines about military and diplomatic issues,” Dr. Stur said. “That the Diederich College of Communication at Marquette has chosen to award me for my professional achievements is an amazing honor and a major validation of my work.”

In 2012, Dr. Stur was chosen for a Fulbright scholar award to teach and conduct research in Vietnam at the University of Social Sciences and Humanities in Ho Chi Minh City. She is director of USM's study abroad program in Vietnam and current Gen. Buford “Buff” Blount Professor of Military History at Southern Miss, Dr. Stur's other areas of research expertise includes gender and war and post-1945 America.

She is the author of Beyond Combat: Women and Gender in the Vietnam War Era, among other books and articles, including contributions to a recent series of columns in The New York Times titled “Vietnam '67” that examine the war's impact on America militarily, politically and culturally. In 2017, she co-edited the anthology Integrating the U.S. Military: Race, Gender and Sexuality Since World War II and is nearing completion of another book Saigon at War: South Vietnam and the Global Sixties.