USMs Graham Named to Ocean Exploration Trust Board of Directors 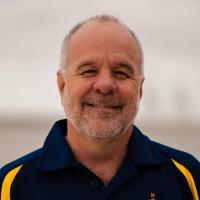 University of Southern Mississippi (USM) School of Ocean Science and Engineering Director Monty Graham has recently been named to the national Board of Directors for Ocean Exploration Trust, Inc.

Ocean Exploration Trust's (OET) mission is to “engage in pure ocean exploration” and was founded in 2008 by Dr. Robert Ballard. As a leader in ocean exploration, Ballard is best known for his 1985 discovery of the RMS Titanic. He discovered hydrothermal vents and “black smokers” in the Galapagos Rift and East Pacific Rise in the 1970s. Ballard has successfully located other significant shipwrecks in the world's oceans, including the U.S. aircraft carrier Yorktown, and John F. Kennedy's boat PT-109. Ballard serves as president and founder of OET.

“This is an exciting opportunity for us at The University of Southern Mississippi, as our students will have some incredible opportunities to be a part of exploring the depth and breadth of the sea,” Graham said.

When asked about serving on the OET board Graham said, “I'm looking forward to opportunities for advancing pure ocean exploration and discovery. Exploration is an increasingly diminishing part of science but think back on the first 400 years of global exploration. Exploration was largely driven by the desire to understand what resources a state owned—or wanted to own. Modern science is driven by this resource understanding, and it is important to learn what we collectively have on this planet, which is mostly beneath the water's surface.”

In addition to his role as Director of USM's School of Ocean Science and Engineering, Graham serves on the Board of Trustees for the Consortium for Ocean Leadership. He is co-lead on the Northern Gulf Institute National Oceanic and Atmospheric Administration (NOAA) Cooperative Institute, an Advisory Board Member for the National Academy of Sciences' Gulf Research Program, and a Board Representative and past Chair for the Gulf of Mexico University Research Collaborative. In 2017, Graham was appointed by Gov. Phil Bryant to serve as chairman of the Governor's Ocean Task Force.

-William “Monty” Graham, Ph.D., Director of the School of Ocean Science and Engineering, The University of Southern Mississippi