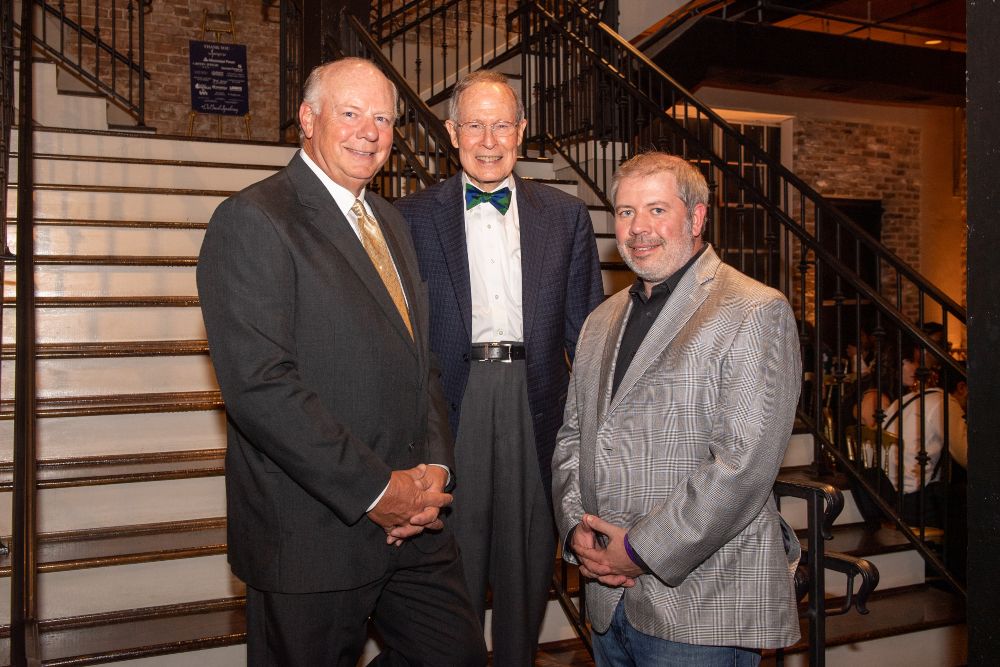 At the recent DuBard School Speakeasy, the DuBard School for Language Disorders at The University of Southern Mississippi presented awards to three members of the community who have shown significant support of the organization throughout the years.

“We are grateful for the opportunity to recognize DuBard School supporters at the Speakeasy each year,” said Missy Schraeder, DuBard School Director. “The three men honored this year are a great representation of our supporters overall. Whether you are a small business owner, a university employee or member of the community who wants to be more involved, there is always a way for people to give back. We are so appreciative when the DuBard School is the recipient of that generosity.”

Mr. Ortego has been a steadfast supporter of the DuBard School since he first visited the school in 2013. Since that time, he has supported the school’s every effort. From the annual Thanksgiving meal provided to the DuBard School students and staff, cheesecakes donated for the Sertoma Club silent auction or contributions for the Speakeasy, Mr. Ortego is always eager to support the school. In all of his efforts for DuBard School, he never asks for promotion or recognition of himself or of his business, Cotton Blues. He simply gives.

It is not an overstatement to say that the DuBard School for Language Disorders exists today because of Dr. Aubrey K. Lucas. The school, previously known as the School for Children with Language Disorders, was only 13 years old when Dr. Lucas became President of The University of Southern Mississippi in 1975.

Over the years, he has demonstrated his love and support of the DuBard School through leadership, service, and friendship—from supporting the school’s engagement with the United Way and the Kelly Gene Cook Foundation, to working to change the name of the school to honor founder Dr. Etoile DuBard, to serving as the Honorary Chair of our 50th Anniversary Campaign, Dr. Lucas has always been available and more than willing to help.

In fact, at a critical point in the school’s history in the late 1980s, Dr. Lucas recognized the important services provided by the DuBard School and supported the school, along with all of the clinical programs in the then Department of Speech & Hearing Sciences, when their very existence was threatened two years in a row. He listened to families whose children desperately needed the school, and went to the State Board of Education to advocate for these continued services.

Mr. Browning’s has been a champion of the DuBard School going back over 30 years. In that time, he has done everything from dressing up as Santa Claus for the children to being a founding member of the DuBard School Foundation Trust, to chairing the school’s 50th Anniversary Campaign Steering Committee—the latter he guided to a successful $2M completion.

To this day, Mr. Browning remains dedicated to the DuBard School Advisory Board and Finance and Development Committee. He has not only served the DuBard School for many years in a variety of ways, he always does so with a smile.

About the DuBard School for Language Disorders

The DuBard School for Language Disorders was established in 1962 and is a clinical division of the Southern Miss Department of Speech and Hearing Sciences. The school serves children with severe language/speech disorders, including the written language disorder of dyslexia/specific learning disabilities, and/or hearing impairments and provides guidance and counseling for parents and families of the children. The school is a practicum site for university students majoring in speech-language pathology, audiology or deaf education. DuBard School for Language Disorders is a United Way agency. Further information is found at www.usm.edu/dubard.