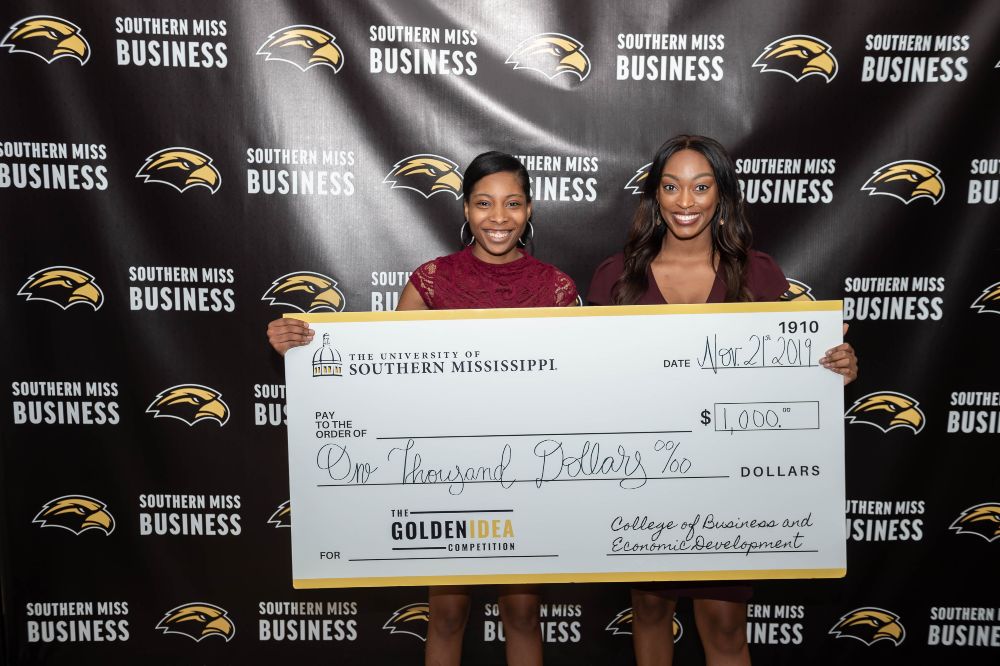 The team consists of Tiera Bryant and Whitney Jackson, both senior entrepreneurship majors. Their Pro Waiter idea allows for restaurants to temporarily staff waiters with a pool of screened, trained applicants – much like an Uber concept for waiters. The first-place finish included a $1,000 cash prize.

The Golden Idea Competition, modeled after the hit TV show “Shark Tank,” provided a platform for budding entrepreneurs to pitch their products/services to would-be investors.

“Sugar and Spice” took second place and a $500 cash award. The idea for a specialty spice store was devised by Natalie Rushing, a senior nursing major from Bogalusa, La.

Third place, and a $250 cash award, was shared by two ideas. “Bus Spot” is designed to create an app to GPS track campus shuttles to allow live feed for students to know estimated arrival times of their buses. The idea was formulated by Rida Hassan, a senior management major from Karachi, Pakistan, and Kevin Morgan Bailey, a senior marketing major from New Concord, Ohio.

Thirty teams comprised of up to four students initially submitted proposals for their services or products when the competition was announced. In these proposals, students discussed their products, what problems these products would solve, potential revenue and their target market. Students submitted these applications to a group who decided which ten teams would advance to round two.

The top 10 teams competed in the Golden Idea Competition before of a panel of judges, consisting of notable USM alumni and community members. Each team had two minutes to pitch their idea and three to five minutes for questions. Shortly thereafter, the judges conferred to decide the top three contestants. From there, live audience voting determined which teams took first, second and third places.

The competition was sponsored by the USM Collegiate Entrepreneurs’ Organization, the College of Business and Economic development, the School of Management, and the Center for Economic and Entrepreneurship Education.