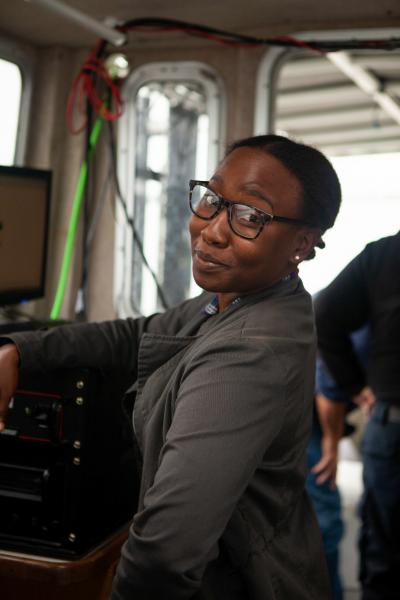 A recent discovery in Alabama shows evidence that a team of researchers from The University of Southern Mississippi's (USM) School of Ocean Science and Engineering discovered the Clotilda, America's last slave ship, more than a year ago.

Ben Raines, a writer and documentarian who was then a reporter for AL.com, believed he had located the whereabouts of the Clotilda deep in the waters south of Mobile and wanted to know for sure. He contacted SOSE Director Dr. Monty Graham and set up a date for a hydrography team to assist in his quest.

“At the time we got the call for this project, there was a narrow window where the water was just right to do this,” said Dr. Graham. “I saw this as an opportunity to not only discover a sunken piece of history, but to also use this expedition as a teaching moment for our students to use their trade to marry science and history under the most unique of circumstances. “

In April 2018, USM scientists conducted a hydrographic survey of the Mobile River on the east side of 12-mile Island using the RV LEMOYNE, which was outfitted with sonar capable of both bathymetric mapping and side scan sonar imagery, a Marine Magnetics Explorer Pro Magnetometer for metal detection, the Applanix POS-MV and GPS antennas for positioning, and a Velodyne Puck lidar for shoreline delineation and terrain.

Kandice Gunning said she vividly remembers the mood on the vessel that day.

“The day had an air of curiosity and enthusiasm as we embarked on our journey up the river,” she said. “We had a lot more systems running than usual, it forced us to be even more engaged and attentive to what was happening on the monitors. With real-time hydrographic survey data coming in showing features that met the description of the Clotilda, the mood overall was pensive.”

Gunning, originally from Santa Cruz, Trinidad and Tobago, came to USM in 2011 to pursue a master's degree in hydrography before beginning her Ph.D. in marine science with an emphasis in hydrography in 2013.

During the Clotilda discovery survey, Gunning was responsible for survey line planning, operation of a system, which offers bathymetry, tracking backscatter and sidescan imagery, on-survey object detection and processing of the data for production of a bathymetric chart of the area of survey.

Dr. Graham said the team had almost finished their search to no avail after all they found were an array of sunken metal boats and lumber when suddenly Gunning noticed something strange showing up under the surface.

“It can't be understated how important Kandice and Max were in us continuing our search that day,” he said. “They really helped us pinpoint the exact spot.”

Dr. Graham said Gunning and Van Norden had found an area of wreckage that perfectly mimicked the dimensions of the Clotilda. Divers and technology aboard the vessel started to quickly find strong evidence linking their search to the sunken slave ship.

The week after the survey trip, the team processed and reviewed the collected data. USM researchers discovered about 10 possible contacts along the eastern side of the river. After further analysis, they narrowed down the three most significant contacts could possibly be the Clotilda.

“It made the simplest sense this is where the ship was sunk,” Dr. Graham said. “With every nail and wooden stake we pulled up, we thought this was it.”

Although the team found evidence of 19th-century construction such as nails, and believed the size was identical to the dimensions of the Clotilda, researchers were told their findings weren't consistent enough to confirm the discovery.

“Thinking back to the moment I was told that our findings were inconsistent, I don't think I responded to that information but instead absorbed it,” Gunning said. “I thought our work was significant despite the news. We conducted a survey in a body of water that from all reports had not been surveyed as extensively as we did. So, my general outlook on that news was more acceptance than defeat.”

Any sting of defeat would not linger long. More scientists led by Dr. James Delgado, an authority in maritime archaeology, descended upon the original spot uncovered by USM.

After intensive research such as X-ray fluorescence tests and comparisons of building materials, dimensions and stories, and multiple dive teams, Dr. Delgado sent his findings to six experts for a peer review on the data. Every one of them concluded this ship was in fact the Clotilda.

Gunning said hearing the evidence they found is indeed the Clotilda gives her a sense of relief that their work to unveil some of America's history wasn't in vain.

“I'm truly pleased that our work has contributed to a finding of that magnitude,” she said. “I've been reading even more about the ship and the people associated with it and am relieved that we could add details to history.”

The journey's foundation may have been within the scope of hydrography and marine science, but Gunning said this discovery means more than that.

“The history surrounding U.S.-Africa slave trade, the ship and the people onboard holds great cultural, political and historical significance,” she said. “Specifically, for those who are descendants of its journey, this discovery may help bring closure and healing. I could imagine that from generation to generation this story was passed on. A story of a culture's past that desperately needed a final chapter. I am glad that we could help provide some help with the contents of the last few paragraphs of that final chapter.”