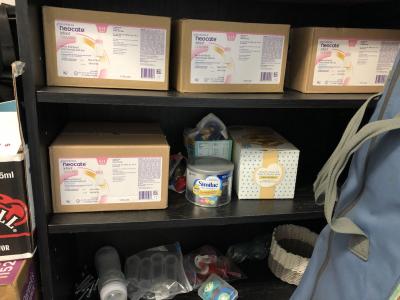 Baby formula is among the items Elijah's Closet keeps on hand.

Five years ago, Andrea Watson got a call that she knew would come – but one she also was totally unprepared for.

As a registered foster parent with the Mississippi Department of Child Protection Services, Watson had agreed to take children ranging in age from newborns to 12 years old. The problem for Watson, a social work major from Vancleave at the University of Southern Mississippi – or any foster family – is that it's nearly impossible to have all the supplies needed to care for a child on short notice.

“We got a call about a 4-day-old baby at the hospital and they asked if we wanted him. We told them yes, and they said we had an hour to come get him,” she says of the small infant who would become her foster son, Jaxon, now 5.

Watson, who has three biological children, had already been fostering for a few years when the call came for Jaxon. But the moment struck a chord with her, and she decided to do something so that other families wouldn't find themselves in the same bind.

“Because we were fostering, we knew a lot of CPS workers, so we let them know that if someone needed something and we had it, we'd give it to them,” she says. “We were thinking there's got to be something better for this. We were the last people they called, so (Jaxon) probably would have ended up in shelter at 4 days old.”

Over the next five years, Watson's passion project has evolved into Elijah's Closet, which became an official 501(c)(3) nonprofit last year. It provides essentials for both foster families and biological families who are seeking the return of their own children from protective custody.

The name and the organization are intimately personal for Watson, as they honor her late son Elijah, who died at 3 months from a chromosomal disorder called partial trisomy 22Q in 2009.

“Usually you don't give birth and have a miscarriage, so for me to even have him was unexpected,” Watson says. “He was very quiet but also rambunctious. He had a buddy in the hospital we called his bunkmate, and they both pulled out their feeding tubes and christened their cribs. Even though he was only 3 months, he had a personality.

“We realized how important kids are, what gifts they are, and continued taking in foster children. When they come up for adoption, we adopt them.”

Bridging the Gap in 3 Coastal Counties

Harrison County has the most children under CPS care in the state, 726, and Jackson (265) and Hancock (172) counties are third and fourth, respectively, according to CPS data from March 1. Together, the three counties make up 24 percent of the 4,848 children statewide under CPS care.

“We service from one side of the Coast to the other,” Watson says. “There is a big need and a big demand for our services.”

“I have begun to use Elijah's Closet to bridge the gap during that three-week period before the family receives the money,” she says. “I think it's amazing she turned a tragic situation into something that is providing the world for these children. She didn't let Elijah die; he's living through Elijah's Closet at this point.”

Davis cites a similar example to Watson's story with Jaxon. But in this case, Elijah's Closet was at the ready, providing a car seat, diapers and wipes to the family before Davis arrived with the baby.

“They had all the essential necessities to get started,” she says. “The family didn't have to pay out of pocket. It takes away the financial burden that can stop foster families from thinking they can't take on the kids because they don't have the money up front.”

Watson echoes that sentiment. “We don't want a child turned away because a family doesn't have a crib or a car seat or a twin-sized bed. They can call us at any time, and we'll get them everything they need.”

She says Elijah's Closet also works with representatives of Court Appointed Special Advocates (CASA), which operates in all three counties and will request items as they monitor children's home lives.

Needed: A Warehouse or Store Front

The most in-demand items are car seats for infants and toddlers, cribs, beds, bedding, bed frames and mattresses, Watson says. She adds that, on average, the group helps between 20-22 families each month.

There is a high volume of goods coming in and out, and Elijah's Closet has its de facto headquarters at a storage complex on Popps Ferry Road in Biloxi. The biggest need, Watson says, is for more storage in a warehouse, or ideally a store front where families can select what they need.

“We have so many children we service, and there's more and more,” she says. “We hope to find someone looking to donate a building for a tax write-off.”

The best way to connect with Elijah's Closet to donate or volunteer is through its Facebook page. The organization acts quickly to pick up donations or connect donors to families in need.

“If I put a post on Facebook that we need two car seats, somebody that day has answered it and dropped the seats off for the children where they need to go,” says treasurer Dianna Jones.

A prime opportunity to donate is the Birdies for Charity promotion through the 10th annual Rapiscan System Classic PGA Tour event March 28-31 at Fallen Oak in Biloxi.  Sponsored by the Gulf Coast Community Foundation, the program accepts donations of $10 or more or allows pledges of a fixed amount, say 5 cents, for every birdie made during the tournament. Donors can designate Elijah's Closet or any participating charity; the donor who guesses the correct number of birdies will win a prize package at the Beau Rivage.

“A lot of times, children are coming into a new home with nothing,” Watson says. “For a child being removed and placed somewhere else, that's difficult. We want to make it easier. Even if it's just a teddy bear.”