Home/News/2019/Three USM Students Earn Goldwater Scholarships for 2019; Most Since 1995

Three USM Students Earn Goldwater Scholarships for 2019; Most Since 1995 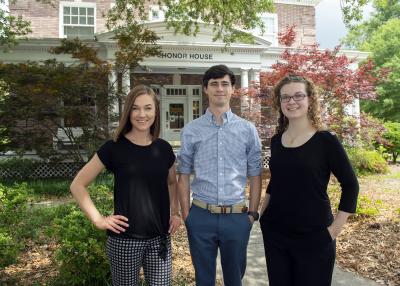 The University of Southern Mississippi (USM) sports a well-documented tradition of excellence in producing Goldwater Scholarship winners. And now the bar has been raised even higher as three USM students have earned the prestigious award for 2019.

Not since 1995 has the University seen three winners in the same year. No other Mississippi college or university had more than one winner for 2019. This year's trio brings the total number of USM Goldwater Scholarship recipients to a state-leading total of 24.

“The Goldwater Scholarship is considered the premier nationally competitive scholarship for STEM (Science, Technology, Engineering and Math) research as an undergraduate student,” said Danielle Manasco, project director for Nationally Competitive Programs at USM. “The application process is extensive and coincides with an already rigorous course load and research hours in the lab. “The monetary prize is only one benefit of being named a Goldwater Scholar. This accomplishment and academic honor gives our students a competitive edge which will help them gain admittance into the most prestigious graduate programs in the country.”

Erin Crater, of Laurel, Miss., is a junior with a double major in polymer science and chemistry. A member of the University's Honors College, Crater was awarded entrance in the Ernest F. Hollings Scholarship Program of 2018 through the National Oceanic and Atmospheric Administration (NOAA) and a 2018 Goldwater Honorable Mention. Faculty mentor: Dr. Jason Azoulay. Research emphasis: conjugated polymer-based fluorescent sensors for the detection of contaminants in seawater.

Said Crater: “The Goldwater Scholarship is positive confirmation of the choices I have made in my undergraduate career. Often, I wondered how many late nights studying would pay off. Knowing that people across the nation value my work and see my potential as a scientist motivates me to continue challenging myself.”

Said Sandoz: “A lot of hard work was put into my application over the past couple of years and it has finally come to a happy end. Academics have always been somewhere that I put a lot of focus, so it's nice to receive recognition such as this.”

Said Ellis: “I was in a state of disbelief because I did not think I had enough accomplishments to receive the scholarship. The recognition of the Goldwater Scholarship means a lot to me as I have been working on scientific research since the summer after my junior year of high school.”

From an estimated pool of more than 5,000 college sophomores and juniors, 1,223 natural science, engineering and mathematics students were nominated by 443 academic institutions to compete for the 2019 Goldwater scholarships. A total of 493 scholarships were awarded this year.

“We are extremely proud of our students who have been recognized in many nationally competitive scholarship programs, and it is especially exciting to have three prestigious Goldwater Scholars in one year,” said Dr. Kate Howard, Dean of Admissions at USM. “Erin, Clara and Michael are outstanding and much of their success is a result of the support of Danielle Manasco in the Office of Undergraduate Scholarships and many USM faculty who work so diligently alongside them.”

The Barry Goldwater Scholarship and Excellence in Education Foundation provides scholarships to college sophomores and juniors who intend to pursue research careers in the natural sciences, mathematics and engineering. The Goldwater Foundation awards scholarships of up to $7,500 a year assisting with costs associated with tuition, mandatory fees, books, room and board. A sophomore receiving the Goldwater Scholarship will receive up to $7,500 in each of his/her junior and senior years. A junior will receive up to $7,500 in his/her senior year.

“Both Erin and Michael have taken full advantage of the opportunities for personal growth, research opportunities and travel support that the Honors College provides,” she said. “Curious and committed to the pursuit of knowledge, all three of these students exemplify the best that Southern Miss has to offer. I congratulate them on their achievements.”

The Barry Goldwater Scholarship and Excellence in Education Foundation was established by Congress in 1986 to serve as a living memorial to honor the lifetime work of Senator Barry Goldwater, who served his country for 56 years as a soldier and statesman, including 30 years in the U.S. Senate.