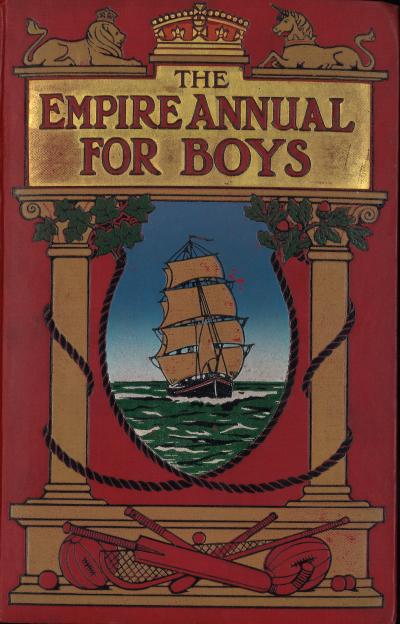 "The Empire Annual for Boys," an item featured in one of the USM 2019 Student Curated Exhibits, "Creating Little Imperialists: Nationalism and “Otherness.'"

University Libraries' Special Collections at The University of Southern Mississippi (USM) is hosting an exhibit opening to highlight exhibits curated by three Southern Miss students on April 17 from 4 - 5 p.m. in McCain Library and Archives, room 305.

Special Collections leads a program that provides students the opportunity to curate mini-exhibits featuring materials from the collections. Students learn how to select items for display, install the materials, write labels and exhibit text, and publicize the exhibit.

Creating Little Imperialists: Nationalism and “Otherness” in British Historical Children's Literature, curated by dual history and library science graduate student, John Carter, examines how children's literature sought to instill nationalistic pride in the British Empire and differentiate Brits from other peoples of the empire. British writers and illustrators used specific language, symbols, and illustrations, such as images of the Union Jack or racialized depictions of peoples under British authority, to create the next generation of imperialists. The exhibit features a diverse array of late-19th and early-20th-century novels, textbooks, pictures books, and periodicals from the de Grummond Children's Literature Collection.

The Magical Umbrella of Children's Literature, curated by English Ph.D. student, Karlie Herndon, examines the many ways in which the everyday umbrella becomes something special in children's books. Umbrellas serve as magical instruments that often allow their owners to experience impossible adventures, find strength within themselves, and express their individuality. The exhibit features books, manuscripts, and illustrated cards from children's authors from all over the world: the enchanted umbrella spans decades and hemispheres, appearing in a surprising range of children's books.

“Make the World a Better Place to Live In”: Early Activity of the Hattiesburg Review Club, 1913-1924, curated by dual history and anthropology graduate student Daniella Kawa, looks into the formative years of one of the first women's literary organizations in Hattiesburg. The young club's members focused on both literary endeavors and community development. By looking at items, such as club yearbooks and meeting minutes, the Hattiesburg Review Club becomes representative of other women's literary club activities throughout the city in the same period, and shows how women affected their communities in the early 20th century.

These exhibits will be on display on the third floor of McCain Library and Archives in room 305 through February 2020. For questions about the program or the exhibits on display, contact Jennifer Brannock at Jennifer.BrannockFREEMississippi or 601.266.4347.