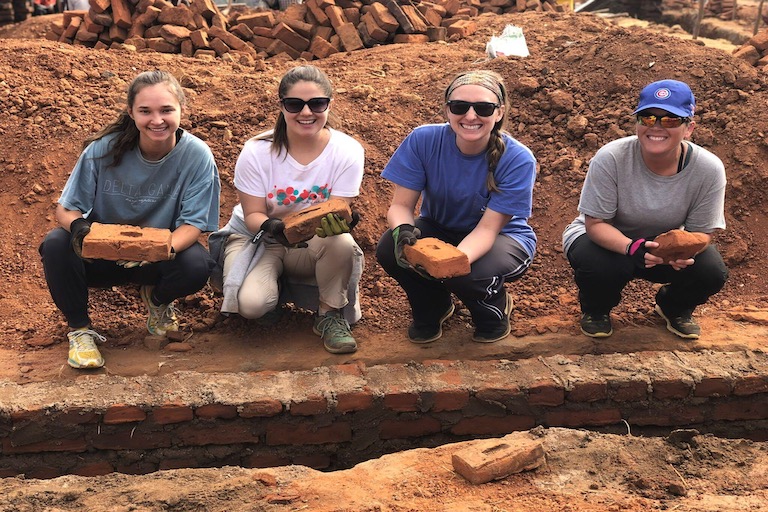 University of Southern Mississippi (USM) student Kaitlyn Collins gained a greater appreciation for the luxuries afforded most U.S. residents during a recent trip to Malawi, Africa where she participated in the ground-breaking for a new school.

USM’s College Panhellenic Council partnered with the University of Indiana on the project, raising funds through the Circle of Sisterhood philanthropy. Megan Wilkinson, assistant director of Fraternity and Sorority Life at USM, explained that the project idea and fundraising effort began in 2016.

“Due to the fundraising commitment timeline, we could not do it alone, so we reached out to Circle of Sisterhood to see if there were other schools, like us, who wanted to partner. Indiana University answered the call and we decided it was a good match,” she said.

Wilkinson and four USM students joined the Indiana contingent for the official ground-breaking in Kasiya Village on May 23. For more than two weeks, the USM group contributed to the initial construction work which included dozens of laborers from the Malawi region.

The school, which will house students in grades 1-8, is expected to be completed in approximately six months. To say the facility is needed would be a drastic understatement.

“For the community where we broke ground, they simply have too many children desiring an education and too few locations to host them,” said Wilkinson. “Some are currently meeting in an old church which had no chairs. In the sixth-grade class, they were sharing four books for almost 30 students.”

Located in southeast Africa, Malawi is among the world's least developed countries, with about 85 percent of the population living in rural areas. Agriculture remains the primary economic driver for the country’s approximately 18-million inhabitants.

Hattiesburg, Miss., native Callie Crider, a junior speech pathology major at USM, noted that what impacted her the most in Malawi was the overwhelming sense of love and community that was present every second during the group’s visit.

“For a community that is so isolated and impoverished, it was filled with love and laughter and true happiness that I have missed each day since being back in America,” said Crider. “The people there are filled with such curiosity and have big dreams for their lives despite having so many obstacles in their way.”

Wilkinson emphasizes that education serves as the cornerstone for economical and societal progress in countries like Malawi where poverty rates are well above average.

“We believe in the power of education to provide opportunities for women worldwide,” said Wilkinson. “Breaking the cycle of poverty and illiteracy will allow for the entire community to develop. Physical school buildings provide shelter for students to learn in a consistent environment with desks, chalkboards, and other learning materials.”

The eye-opening experience for Collins helped echo Wilkinson’s sentiments about the importance of education. Particularly in under-developed regions of the world.

“I believe that education is the number one way to empower people,” said Collins. “That could mean educating someone on their choices in presidential candidates, so that they can be an informed voter; or it could mean educating someone on how to read or write, so that they can provide for their families. Education is a right that should be given to every single person on this planet, regardless of age, gender, socioeconomic class, sexual orientation, etc.”

Wilkinson fondly recalls the warm welcome she and the USM students received upon arrival in the village. Several children ran more than a mile to greet the van carrying the USM contingent. And while she found the entire experience profoundly rewarding, Wilkinson said she said an emptiness of sorts still lingers.

“I assumed I would leave Kasiya Village feeling great about the money we raised and the labor we provided to help students. Instead, I left with an unfinished feeling,” she said. “The truth is that these students will still not have an easy access to high school education. It may be generations before they can afford to send more than two or three students to high school.”

Thus, much more work beyond the raising of a school structure, needs to be done.

“This is one village whose story is not unique. This is the beginning of very slow progress,” said Wilkinson. “Although I am honored to have contributed to this village’s educational advancement, I have realized my commitment to education cannot end there. We must continue to support education worldwide to advance and elevate our entire world.”