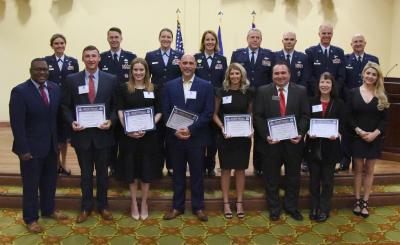 Participants in the 403rd Wing Honorary Commander Program at Keesler Air Force Base.

Dr. Steve Miller, Vice President for The University of Southern Mississippi (USM) Gulf Park campus and Pam Moeller, Director of External Affairs for USM's School of Ocean Science and Engineering, have been selected for the 403rd Wing Honorary Commander Program at Keesler Air Force Base (AFB).

The Honorary Commander Program offers an opportunity for local civic and community leaders to gain insight and experience about the U.S. Air Force and Keesler AFB operations and programs. In addition, Air Force commanders and personnel have the opportunity to connect to the local community and its key leaders.

Program objectives include fostering a supportive relationship between Keesler AFB personnel and key members of the local community, increasing military involvement in civic endeavors, and strengthening relationships between the community and Keesler AFB.

“It is an honor to be selected to participate in the Honorary Commander program with the 403rd Wing at Keesler Air Force Base. Establishing connections and developing relationships with external partners, such as Keesler, help to advance the work that we do in higher education across the Mississippi Gulf Coast,” said Miller.

Honorary commanders are nominated by local chambers of commerce and Air Force commanders. When possible, the nominee will be aligned with a wing, group, squadron or staff agency commander that parallels the individual's background or interest.

“This is an exciting opportunity, and I am grateful to the leadership at Keesler Air Force Base for selecting me to represent the School of Ocean Science and Engineering as an Honorary Commander. I look forward to learning more about the role of Keesler in our community and the work they do,” said Moeller.

Over the course of the program, participants will interact with unit personnel to learn more about the U.S. Air Force and the mission of Air, Education and Training Command and Keesler AFB, attend various activities hosted by the training wing, and provide opportunities for the host commanders to visit and interact with the University community.

Miller and Moeller will join Dr. Casey Maugh Funderburk, Vice Provost for the Gulf Park campus and Acting Director for the School of Communication at USM, who is serving her second year in the Honorary Commander program.