A unique marriage of art and technology is being employed by The University of Southern Mississippi (USM) Theatre program as it meets the challenges that come with presenting live performance art in the age of Covid-19.

The new production arrangement is helping the USM Theatre program meet one of its primary goals – to continue producing shows live, if not in-person, while adhering to necessary safety restrictions as a result of the pandemic. This approach continues in its current production of Rajiv Joseph’s Describe the Night, available through a live internet stream for its shows set each day Nov. 5-8.

Working inside of ‘pods’ created in the USM Theatre building by USM Theatre faculty member Jay Morris, Describe the Night’s actors act in front of a green screen background, safe within their own space, but are also able to interact with other actors through their webcam and computer. The actors are then taken by the program’s compositing designer and placed within virtual environments. Then, combined with the efforts of the program’s costume, sound, and lighting designer, a virtual experience is created that is very similar to what is seen in a traditional theatre production. Only the actors are ‘real,’ and are not in the same ‘real’ space.

“In a time when many theatres and programs are presenting through the Zoom format, we’re proud to be creating something so visually striking,” said USM Theatre program faculty member Dr. David Coley, who is producing Describe the Night. “Though we do include some pre-recorded shots within Describe the Night, most all of the play is being broadcast as the audience watches it.”

The isolation element of the production is the main hurdle for producers, actors and audiences to overcome with virtual theatre, Dr. Coley said.

The upside to the virtual format, Dr. Coley notes, is an expanded audience.

“One of the great benefits of virtual theatre, though, is that we can open our performances to a greater number of people than we normally would,” he said. “We are no longer limited by the amount of seats in a theater space.” 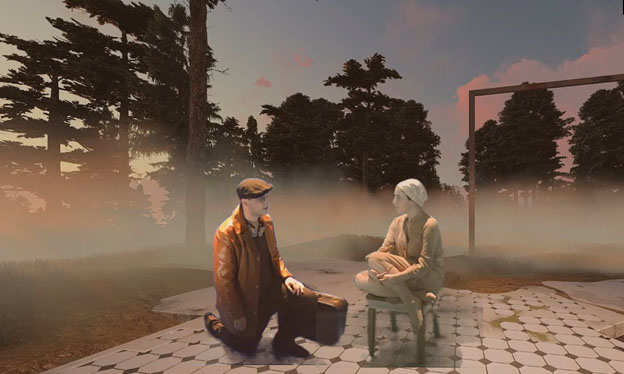 Describe the Night is USM Theatre’s third virtual performance for the fall 2020 semester. Dr. Coley and his faculty colleagues, along with the program’s students, look forward to using the virtual production techniques again in the spring with an eye toward next year, when they hope to gather again with audiences for more traditional productions. “While virtual theatre is not our preferred format, we’re thankful for the efforts and ingenuity of our students in developing this platform that allows us to create and innovate in such a difficult time,” Coley said.

Describe the Night is set in Russia over the course of 90 years, tracing the stories of seven men and women connected by history, myth and conspiracy theories.

Travis Ascione, who plays Nikolai in Describe the Night, concurs with Dr. Coley’s assessments on the virtual theater dynamic. An MFA in Performance student from New Castle, Pennsylvania, he said the cast has benefited from the previous work done on USM’s performances of The Revolutionists and We’re Still Here.

“Working in the pods comes with unique challenges,” Ascione said. “I never get to see the other actors while performing. Our scene partners are points in space that we’ve had to mentally map out. Because of this we can’t take visual cues from each other. We can only really rely on sound cues: someone clears their throat, the sound of pages rustling, etc. It’s really forced me to listen to my scene partner and the scene as a whole, and that’s been a point of growth for me as an actor.”

The technical side of the production “has been pretty amazing,” Ascione continued.

“There’s a level of freedom that Sam Buchanan (director) and the designers have found now that we’ve moved from a physical space to a digital one. Aline Toloto and Jax Wright have created an entirely virtual set that we perform in (Toloto is scenic designer and Wright is assistant scenic designer; both are graduate students in the USM MFA design program). Sam now has the ability to play with camera angles and orientation within the show.

“The level of creativity is kind of mind-blowing.”

Ascione also appreciates the advantage of virtual theatre in the way the cast and crew can share their work more broadly. “Most of us have friends and family who live far enough away that under normal circumstances, they would not be able to see the work we are doing,” he said. “Going virtual has opened up the ability for us to bring our work to them.

“Sure, it’s not theatre as we knew it. The consensus among the cast and technical team is that we want the audience in the space with us, but the work has been inspiring in the way we have adapted, and the final product is amazing.”

For information on USM’s production of Describe the Night, including the how to access it for viewing live, visit https://artdesign.usm.edu/events/describe-the-night/ or https://calendar.usm.edu/event/describe_the_night_by_rajiv_joseph.