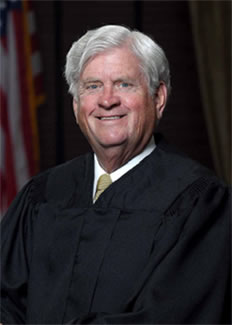 Presented by the Mu Gamma Lambda and Mu Xi chapters of Alpha Phi Alpha Fraternity, Inc., this event is free and open to the public, and will include recognition of recipients of the fraternity’s Community Service, Community Impact, Humanitarian, Douglass T. Baker and Friend of Alpha Phi Alpha awards. Additionally, students from local high schools will be awarded college textbook scholarships.

Before his appointment to the State Supreme Court, he began his law career in 1975 in Biloxi with the firm of Ross, King and Randolph before joining Bryan, Nelson, Allen and Schroeder in Pascagoula, Biloxi and Gulfport. Justice Randolph then opened an office for that firm in Hattiesburg in 1976, and later established the firm of Bryan Nelson Randolph, PA., serving as its president and CEO.

“It is indeed an honor and a privilege to be asked to speak at an event that cherishes the memory and legacy of Dr. King,” Justice Randolph said. “I admire him not only because he accomplished so much good in such a short amount of time, but also never wavered in his belief in a higher power, never minimized or let the world compromise his faith, even in the face of the forces working against him and the civil rights movement. He was an amazing individual.”

A decorated veteran of the Vietnam War, Justice Randolph served as an air traffic controller with the U.S. Army 1st Infantry Division, popularly known as the “Big Red One.” Outside of his work on the State Supreme Court, he makes time for his community and church, which includes service on the boards of directors of the Boys and Girls Club of Hattiesburg, the Hattiesburg Girls Shelter, the advisory board of the Hattiesburg Salvation Army, and as a deacon and Sunday school teacher for Temple Baptist Church.

“We’re fortunate to have Judge Randolph as guest speaker for this annual event,” said retired USM Dean of Students Dr. Eddie Holloway, a member of Mu Gamma Lambda chapter and organizer of the prayer breakfast. “He is renowned in the field of law and justice, as well as a gentleman of faith.

“Each year we look for persons who are pillars of our community and state who will inspire our attendees to consider our human challenges and then commit to betterment, and we believe Judge Randolph will do just that.”

For more information about this event, contact Dr. Holloway at eddie.holloway@usm.edu. 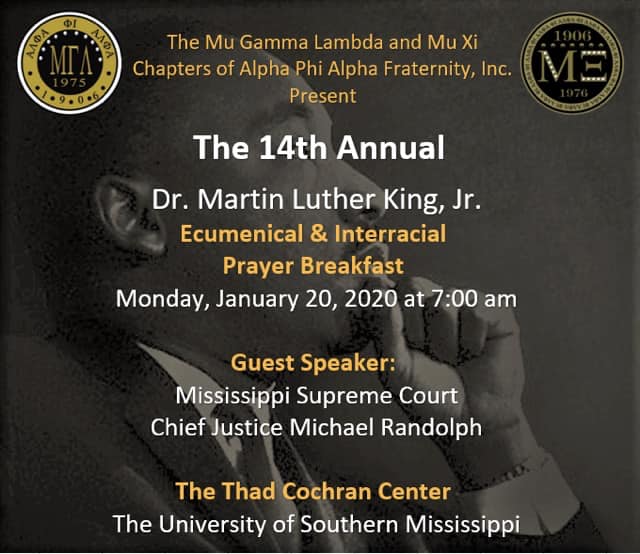