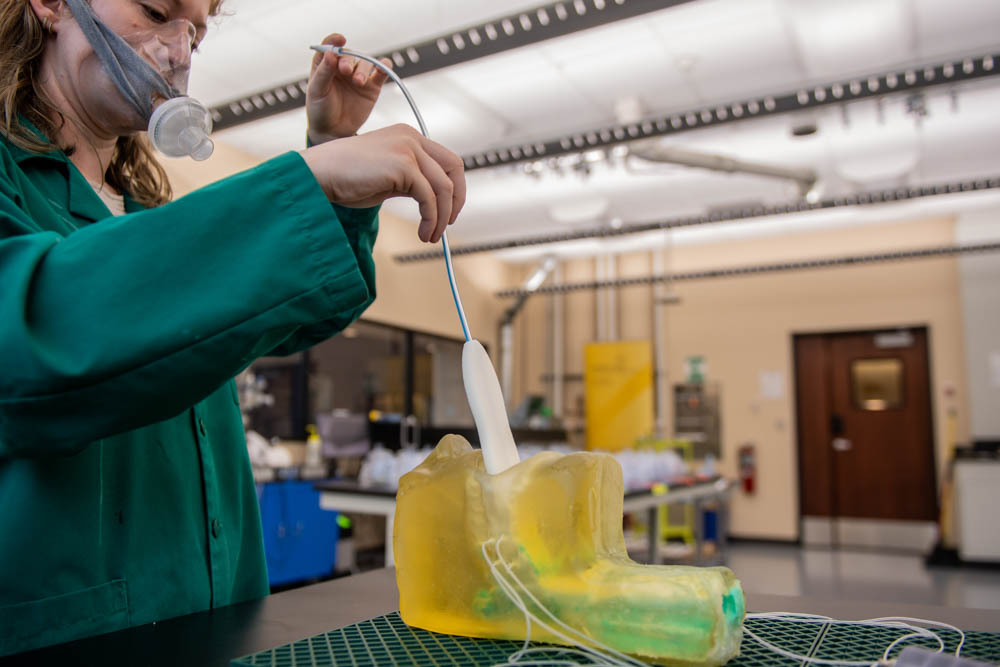 Mechanical ventilation is a life-saving treatment, but it can also introduce complications to a hospital patient’s treatment plan. Saliva can likely to pool in the endotracheal tube connected to a patient’s ventilator, which may lead to a host of problems, including bacterial infections and pneumonia. 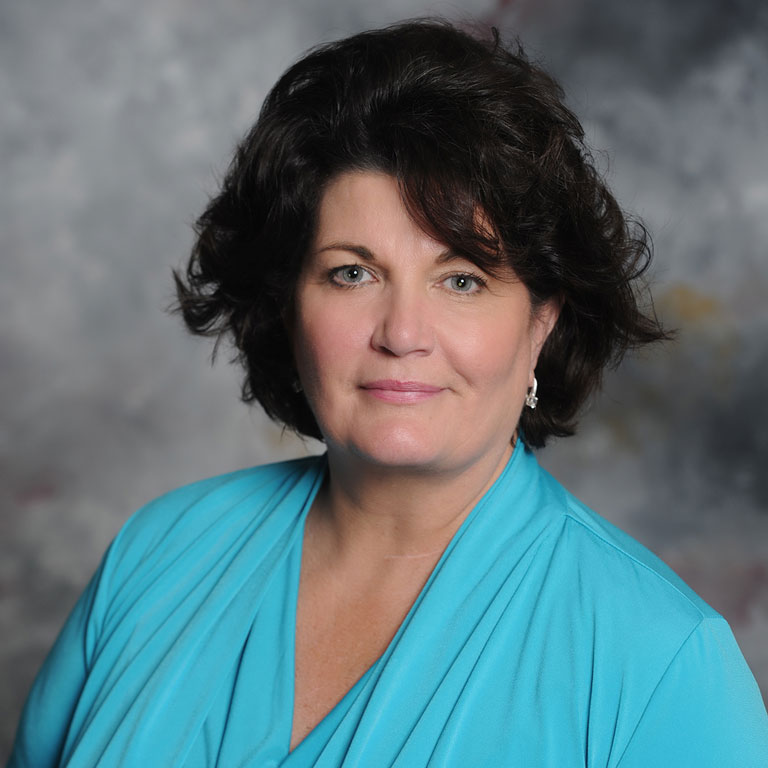 Dr. Nina Mclain, nurse anesthesia program coordinator and associate professor within The University of Southern Mississippi’s College of Nursing and Health Professions, has designed the Oral Suction Device, a sponge-like insert for the back of the throat that could reduce or prevent viral or bacterial infections and associated illnesses for patients on ventilators. This can mean relief for several million surgery and ICU patients each year, Mclain said.

Mclain and her team are also looking into the device’s potential to distribute antibiotics or anti-viral medication to patients during treatment. This could be instrumental in special cases such as complications from COVID-19.

Mclain earned her bachelor’s degree from USM, her master’s degree from Xavier University in New Orleans, and her Ph.D. from Virginia Commonwealth University. She was teaching and doing clinical work at Samford University when she came up with the idea for her device in 2013.

While working as a nurse anesthetist, Mclain repeatedly noticed respiratory complications in comatose and intubated patients on ventilators that made acquiring ventilator-associated pneumonia more likely.

The solutions that existed at the time were far from ideal. About every 30 minutes to an hour, a nurse would use a suction catheter to remove secretions. Other types of suction were available but still didn’t solve the risk for infection.

“Every time they introduce that suction catheter, they are causing microtrauma in the mouth and throat, which also opens up other avenues for infection,” Mclain said. 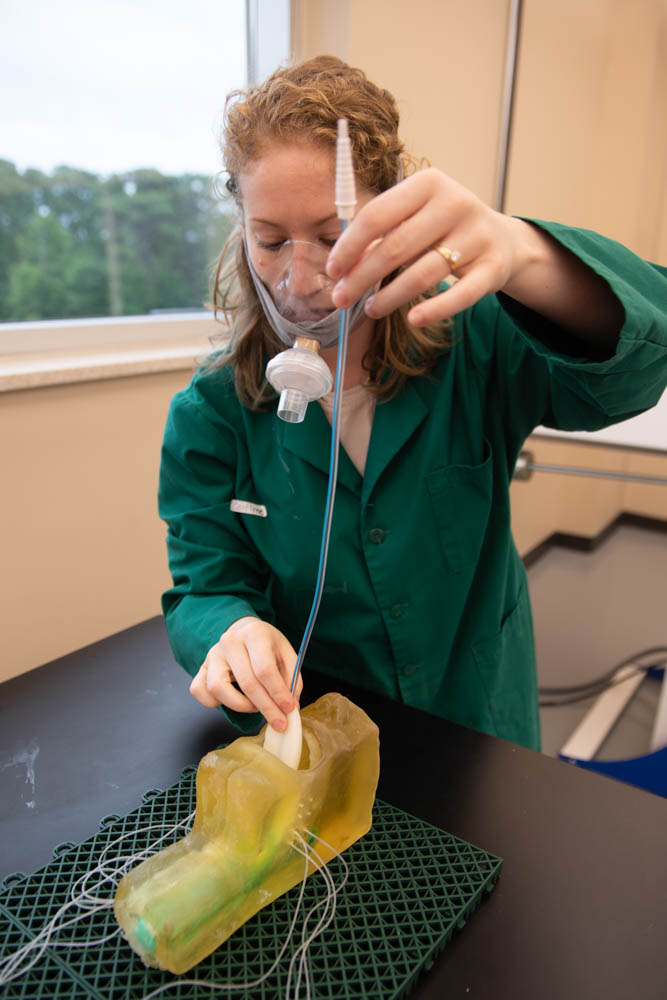 Her device is a sponge encased in a gel and inserted in the back of the throat. It prevents secretions from pooling since the device makes suction “continually available.” Mclain said. The device can also be changed every 24 to 72 hours.

“Right now, there’s nothing else like this on the market,” Mclain said.

Initially, she started working on the product’s design with her research partner Dr. Jep Cole, a facial plastic surgeon and graduate of USM based in Flowood.

“He really helped me tweak it and enhance the coating,” Mclain said. “Once it got developed and we got the patent, he moved on to other projects.”

First, they had to develop a prototype and test it in a head model to make sure it functioned correctly, but it wasn’t until Mclain arrived at USM that the device would really take shape.

In 2017, when USM was in need of a Nurse Anesthesia program coordinator, Mclain returned to her alma mater to take the position, as well as mentor, teach, and conduct her nursing research while maintaining her clinical skills.

Mclain was also very pleased with the support she received for her device upon her arrival to the University.

“The USM Research Foundation had a huge impact on me being able to move forward,” Mclain said. “It was not only their encouragement, but I also met with their board and discussed it with them. They showed enthusiasm for the device, and that I was bringing it to USM.”

Johnny Atherton, president of foundation’s board of directors, said the foundation was excited and proud to be part of McLain’s journey and future of her device.

“This is exactly the reason the research foundation was founded,” Atherton said. “It allows us to support our facility, staff and students as they come up with technology and ideas that we think are market worthy.”

Her earliest financial support came from the USM Office of Technology Development Gap Fund. Sponsored by the Mississippi Defense Initiative, the fund is awarded to further the commercial potential of early-stage military and civilian technologies or innovations. The winner is awarded “innovation vouchers” that can be used to work with USM or USM-approved vendors.

Mclain used her award to work with the Mississippi Polymer Institute, an industrial outreach service of USM's School of Polymer Science and Engineering that offers extensive technical and scientific resources. Together, they identified a biofriendly polymer for the device’s gel coating that would not only create suction and absorb fluid, but also be easy to produce. The team also worked on ways to impregnate the device’s gel coating with anti-viral or anti-bacterial medications. 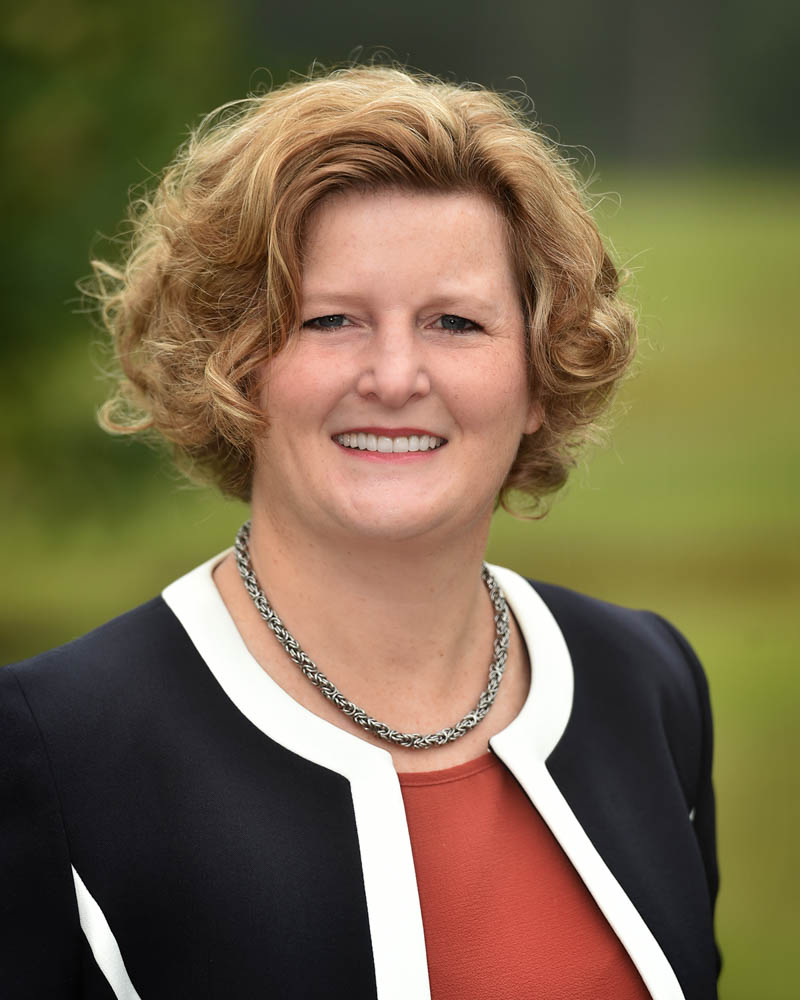 “We were bringing in a skillset we were already very strong in,” Tisack said.

Mclain in August 2018 obtained U.S. and international patents for the device. Now on a fifth-generation prototype, Mclain has focused on lab studies and will introduce the device to market users for feedback soon, Tisack said.

“This project has been challenging, but I would not say that is unusual for product development,” Tisack said. “Every iteration or next step typically brings material changes that may or may not be intentional. The way materials interact with each other requires you to adapt, reassess and reoptimize. Reiterative cycles in product development are very common; We’re just honored to be involved in the development of such a beneficial product.”

While Tisack estimates product development on a medical device can take two to five years, Mclain said working with USM partners has been extremely helpful for getting the device to potential customers.

“I’ve been just blown away by the willingness and the efforts to which they will go to help you further your product or your idea,” Mclain said.

Mclain said her goal is to have a large medical device company purchase and produce the device, or for her team to manufacture the device themselves and create jobs.

“If it can treat just one case of ventilator-associated pneumonia or infection due to pooling secretions, then you’ve saved anywhere between $45,000 and $95,000 for one case to treat,” Mclain said. “We would anticipate that you would want to use this in every long-term ventilated patient or ICU-ventilated patient.”

Tisack said she expects to work on a sixth-generation prototype of the device once they get feedback from the market. Since Mclain came up with this idea while she was treating patients, Tisack is confident her innovation will pay off.

“She saw problems with the existing product and procedure and said there has to be a better way,” Tisack said. “In my opinion, that’s the best way to generate innovative new products. It is rewarding to work with such highly-applied people that create new solutions to solve today’s problems.”