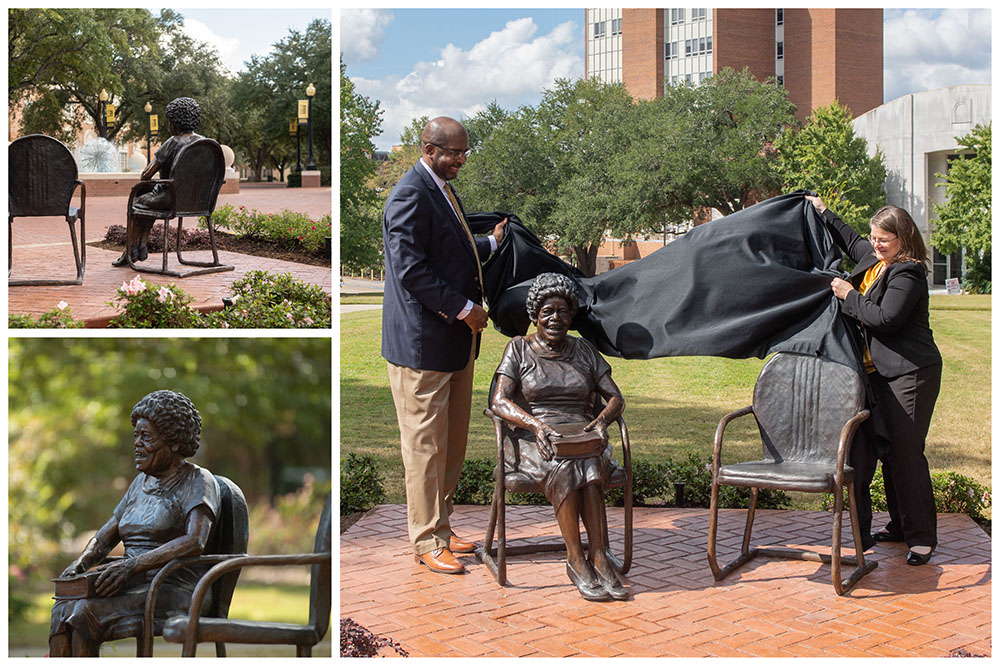 The University of Southern Mississippi Foundation is honoring the life and legacy of Oseola McCarty. In recognition of the 25th anniversary of McCarty’s unexpected planned gift to USM, a virtual celebration features interviews with special guests and the unveiling of a timeless addition to the Hattiesburg campus. Viewers learn stories of her life and the impact of her incredible generosity. To view the video, visit usmfoundation.com/mccarty.

Located on Weathersby Lawn, in the heart of the Hattiesburg campus, the new life-size bronze sculpture is the work of local artist Ben Watts of Columbia, Miss. Commissioned by the USM Foundation Board of Directors as a gift to the University, the sculpture of McCarty was installed on October 6, 2020. An empty chair was designed and placed next to her. Visitors are invited to take a seat with her like many friends did over the years at her home on Miller Street in Hattiesburg.

When she was only eight years old, McCarty began working after school doing laundry beside her mother, grandmother and aunt. She stashed away money earned in her doll buggy for safekeeping. She aspired to become a nurse, but she left school in the sixth grade to care for her ill aunt and never made it back to the classroom. For 75 years, McCarty took in laundry and ironing work until arthritis forced her to stop. She worked hard, lived simply and slowly accumulated a small fortune.

Though she never set foot on USM’s Hattiesburg campus before 1995, McCarty knew the importance of an education and wanted to help students in her community. When asked by her attorney and banker who she desired to leave her assets to after her lifetime, she confidently said her church, three relatives and The University of Southern Mississippi. In 1995, McCarty designated USM as the beneficiary of a $150,000 planned gift, forever changing philanthropy at the University. As an 87-year-old laundress who lived frugally, this gift represented not only the majority of her life savings, but also her abundant generosity.

“When I leave this world, I can’t carry nothing away from here. Whatever I have, it’s going to be left right here for somebody. Some child can get their education, to help them along, because you can’t do nothing now unless you get your education. I don’t regret one single penny I gave to the College. The only thing I regret is that I didn’t have more to give.” – Oseola McCarty

To date, over 100 students from south Mississippi have received support from the Oseola McCarty Scholarship Endowment, totally $568,158 in scholarships. The Oseola McCarty Scholars Program honors McCarty’s strong work ethic, servant heart and love for helping others. McCarty Scholars participate in activities centered around financial literacy, research, career planning and community involvement. They gain access to a customized curriculum and mentorship opportunities to foster their personal development.

In conjunction with the statue dedication and celebration, a fundraising initiative is underway to bring the Oseola McCarty Scholarship Endowment to $1 million. During her lifetime, Ms. McCarty mentioned how wonderful it would be for the endowment to reach this milestone. By increasing the scholarship by $370,000, 20 students can benefit annually in perpetuity. Contributions can be made by visiting usmfoundation.com/givemccarty.