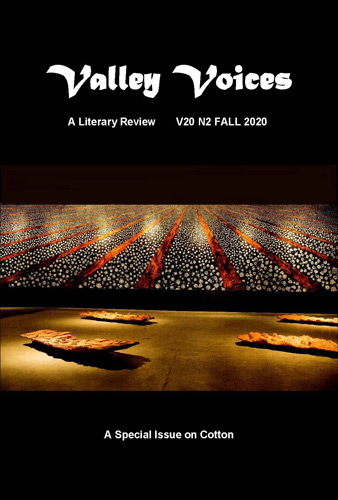 Cotton - a crop deeply interwoven into the economic, political, cultural, and social history of the United States, in particular the Delta region of the nation’s Deep South - is the exclusive focus of a special issue of a literary journal guest edited by University of Southern Mississippi (USM) Professor Emeritus of English Dr. Philip Kolin.

The fall 2020 issue of Valley Voices, published by Mississippi Valley State University, contains a diverse offering of more than 30 original poems, memoirs, six scholarly articles, interviews, and a gathering of compelling photos. Not surprisingly, most of the issue is devoted to the Delta region but also covers other parts of the U.S. (e.g. Texas, Alabama, and California) as well as the world (e.g., 19th century U. K.).

"Cotton is a complex subject and this special issue explores its place in everything from agriculture, the blues, fashion, ginning, ironing and work ware, photography, sharecropping, race, religion and liturgy, textiles, and women's health," Dr. Kolin said.

Among the distinguished poets in this issue are Ted Kooser, former U.S. Poet Laureate, who wrote about cotton candy; Marge Piercy, whose poem looks at "King Cotton"; eminent literary biographer Paul Mariani, whose "A History of Cotton" opens the issue; widely published poet Virgil Suarez recalls his mother's use of cotton in a "wounded Cuba"; and poems by Malaika Favorite, Le Hinton, Larry Thomas, and Virginia Sullivan about the horrors of slavery and cotton. A poem by Rabbi Yehiel Poupko links the holocaust to slavery.

Scholarly articles Dr. Kolin included are a study of Depression-era photographs of cotton fields and workers by distinguished visual historian Joseph Millichap, and blues historian Adam Gussow’s essay on the impact cotton fields had on the biography and canons of such notable figures as musicians Howlin’ Wolf and B. B. King, and James Cotton, whose imagination was stirred early in life by working in cotton fields and then writing about them; and Glasgow Caledonian University Professor Janet Greenlees, who wrote about cotton, the mills, and women's health.

"There is even a nicely illustrated essay on cotton's arch enemy, the boll weevil, by highly respected botanist Dominic Reisig," Dr. Kolin said.

The memoirs comment on the ravages of sharecropping in the Delta, the family heritage in ginning cotton, and the economic hardships of cotton farming in central Alabama in the 1930s. Two insightful interviews close the issue, one with two textile experts commenting on the role of cotton, genetic engineering, fiber, etc.; and another with renowned sculptor Thomas Sayre, whose massive exhibition "White Gold" replicates symbolically the labor of picking cotton and the landscape that haunts the South. Sayre's sculpture graces the cover of this special issue.

For more information about Valley Voices and how to obtain copies of this issue, visit https://libguides.mvsu.edu/c.php?g=786437&p=5630860.