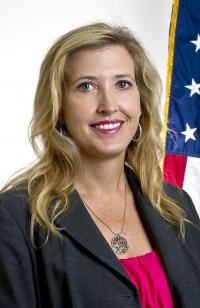 “It is an honor and a privilege to serve as the Associate Vice President for Coastal Operations. I appreciate the confidence USM leadership has displayed by providing me this opportunity to advance the University’s mission for coastal operations and promote and expand research,” said Lucas.

A South Mississippi native, Lucas earned her undergraduate degree (microbiology) from Mississippi State University; her Master’s of Business Administration degree from the University of Alabama-Birmingham and her doctorate (coastal sciences) from USM. She worked for USM’s Gulf Coast Geospatial Center as a scientist and deputy director from 2008-2013 before becoming the chief scientific officer at the Mississippi Department of Marine Resources in 2013. In 2016 she returned to USM as Director of the Thad Cochran Marine Aquaculture Center. She will continue to serve in that capacity until a new director is named.

Dr. Gordon Cannon, Vice President of Research at USM, expressed confidence that Lucas will do an exemplary job of leading and expanding the University’s coastal research efforts.

“As we continue to advance our research programs on the Mississippi Gulf Coast and beyond, I am certain that Dr. Lucas' knowledge of and commitment to our University, along with her background in marine science, will continue to facilitate our success,” said Cannon. “We are fortunate to have someone with Kelly’s legislative involvement. She worked closely with the state legislature as the Chief Scientist of the Department of Marine Resources, and she also has federal legislative experience as a University Fellow in former U.S. Sen. Thad Cochran’s office.”

USM’s coastal community, coastal presence, proximity to the Gulf of Mexico, and unique program offerings distinguish USM from other institutions of higher learning in the region. Last month, USM announced a comprehensive plan that will reshape the future of its coastal operations.

Three foundational pillars have been implemented to position the University’s academic and research programs along the Gulf Coast for even greater distinction and impact:

“The realignment of USM coastal operations presents the opportunity for us to leverage our location and expertise in dynamic coastal and marine environments to provide research and programming opportunities that are distinctive for the communities we serve and worldwide,” said Lucas.

When asked if USM had only scratched the surface of research opportunities in coastal areas, Lucas offered: “We are engaged in amazing innovative research across the Gulf Coast, and we have opportunities to expand. The ocean economy is estimated to more than double this decade, and USM has key investments in all three coastal counties that have positioned us to be at the forefront of research supporting sustainable ocean economic growth.”

To learn more about Coastal Operation at USM, visit: https://www.usm.edu/university/internalportal/coastal-operations/index.php