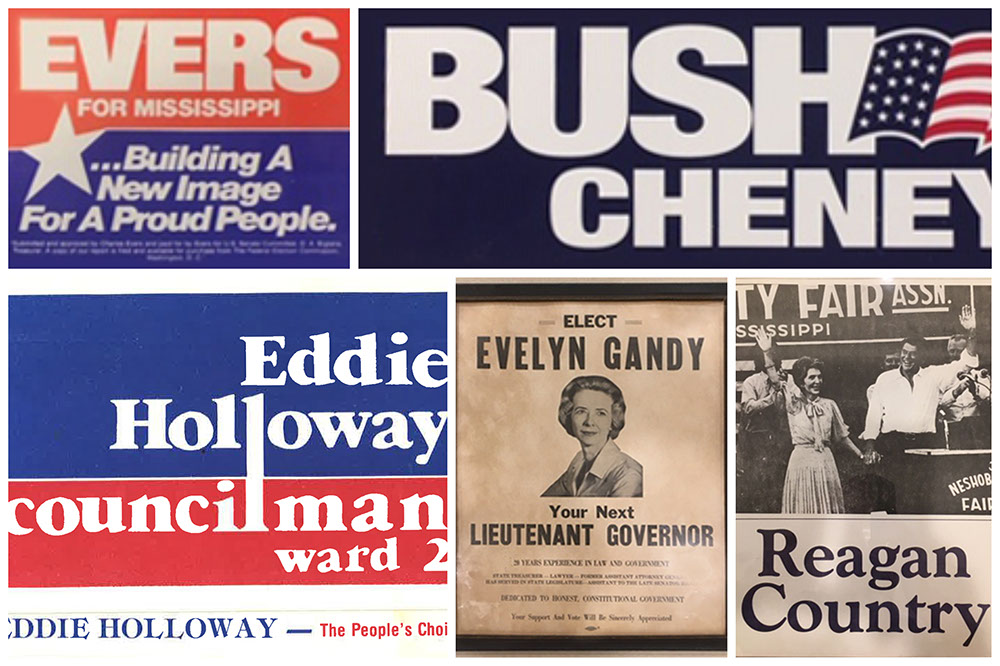 A plethora of buttons, posters, flyers, bumper stickers and other memorabilia showcasing local, state and national political campaigns and activism in Mississippi dating back more than a century make up a collection retired Hattiesburg ophthalmologist Dr. John Pendergrass recently donated to The University of Southern Mississippi (USM) University Archives and Special Collections.

Dr. Pendergrass cites a longtime interest in history and politics as inspiration for the nearly half-century growth of the collection, numbering more than 1,000 items.

“I feel like I’m giving away my children,” Dr. Pendergrass said. “These items really have become like family members, over time. But I knew I needed a good home for them for the future, and USM Special Collections is the perfect place. I know they will take good care of the collection, and make it available for others to enjoy.”

University Archives staff believes the collection is one of the largest of its kind in the country to be held at a university.

“This is a spectacular collection to add to Southern Miss’s Special Collections, and we’re extremely grateful to Dr. Pendergrass,” said Lorraine Stuart, associate professor in USM University Libraries and Head of Special Collections and curator, Historical Manuscripts and Archives. “This collection documents in detail two important collecting areas for us – Mississippi politics and Civil Rights. Many of the political races are fairly obscure and may have been forgotten if Dr. Pendergrass had not taken the care to collect and preserve documentation of them for the past 45 years.”

Buttons include those from the last Confederate veteran to serve as a Mississippi governor, Anselm McLaurin, who had enlisted at age 16 at the end of the war; also from the “Know Mississippi Better Train,” the brainchild of Lt. Gov. Dennis Murphree. The train made summer trips through the contiguous U.S., with promotional materials and Mississippi products; 30 delegates traveled with the train, as well as a 25-piece band from USM. With the exception of the WWII years, it ran from 1925-48.

A button of Aaron Henry, a Civil Rights activist from Clarksdale who served in the State legislature from 1979-1995, and one promoting Free Elections in Sunflower (County) are featured. Stuart says that, “thematically, they are tied together because following the Civil Rights Act of 1964, the 5th Circuit Court of Appeals vacated local elections in the county because of racial discrimination.”

Another button is from Cliff Finch, who defeated William Winter in the Democratic primary during his first gubernatorial run.

“The campaign buttons alone are a visual chronicle of Mississippi political history from the 1890s to now,” Stuart said. “They serve as a portal for students and researchers to delve further into Mississippi.”

Campaign mailers spanning the decades are also an integral part of the collection, and “chronicle how issues and party positions evolved over the years.” “Analyzing those would be an interesting student research project,” Stuart continued “There’s also a potential research project based on the graphics alone – how they have changed over time. There is a lot of different aspects that can be delved into.”

A native of Clarksdale, Mississippi, Dr. Pendergrass graduated from then Delta State College (now Delta State University) and received his medical degree from the University of Mississippi Medical Center. He served in the U.S. Air Force as a Flight Surgeon at Da Nang Air Base in Vietnam and received the Air Medal. He completed his Ophthalmology residency at Parkland Memorial Hospital in Dallas, Texas and practiced at the Green Eye Institute in Hattiesburg from 1975-2019.

Dr. Pendergrass joined the American Political Items Collectors (APIC) organization in 1977 and began collecting in earnest. His collection grew quite large over the years, but his main focus was the President Eisenhower administration. He amassed one of the largest known collections of Eisenhower memorabilia, with nearly 400 items, which he donated to USM in 1984 and that will be incorporated into his recent gift; and, as founder of the Hattiesburg Track Club (HTC), also gifted that organization’s records to USM Special Collections.

When Stuart went to Dr. Pendergrass’s office to pick up some recent HTC records, she spotted his book, Racing Back to Vietnam: A Journey in War and Peace that recounts his experience as a flight surgeon in Da Nang and his return to Vietnam, 45 years later, to participate in a triathlon. “He gave me a copy of the book for the collection, and then gave all of the research for the book,” Stuart said. “So, he has been personally responsible for three unrelated but important collections. I appreciate his generosity and support of USM Special Collections.” For information about USM Special Collections, visit http://www.lib.usm.edu/spcol/.