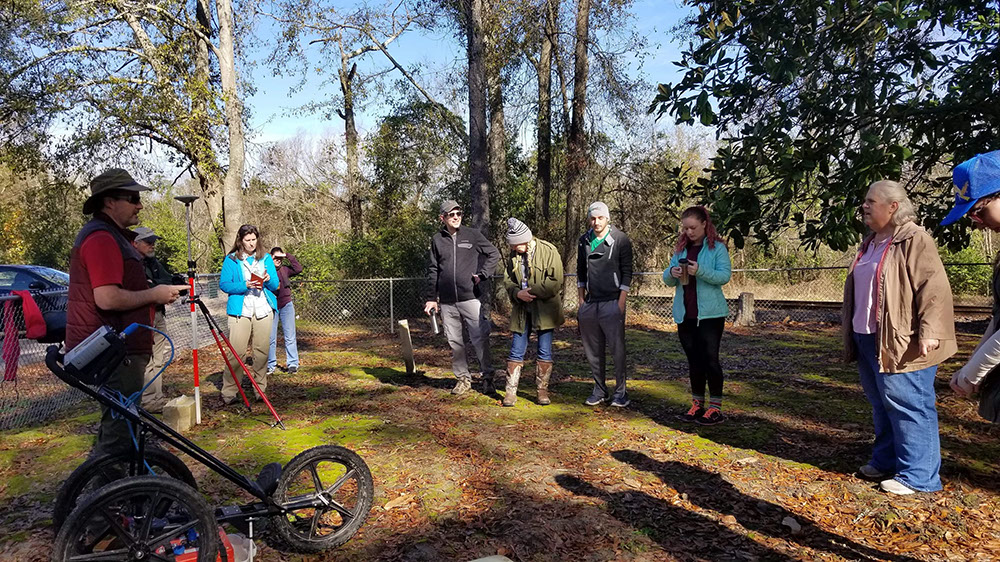 Dr. David Holt, far left, a geography professor at USM Gulf Park, will lead a team of researchers at the Holly Oak Cemetery in Pineville, La. who will examine two sites rumored to be the site of a mass grave where African American soldiers killed in a 1942 riot in Alexandria, Louisiana are interred. Here, Dr. Holt works with USM Hattiesburg faculty members and students examining the historic East 8th Street Cemetery in downtown Hattiesburg.

Two College of Arts and Science faculty members at The University of Southern Mississippi (USM) Gulf Park are working together to get answers for descendants of African American soldiers killed in a riot at Alexandria, Louisiana nearly eight decades ago, and long rumored to have been buried in a mass grave nearby. 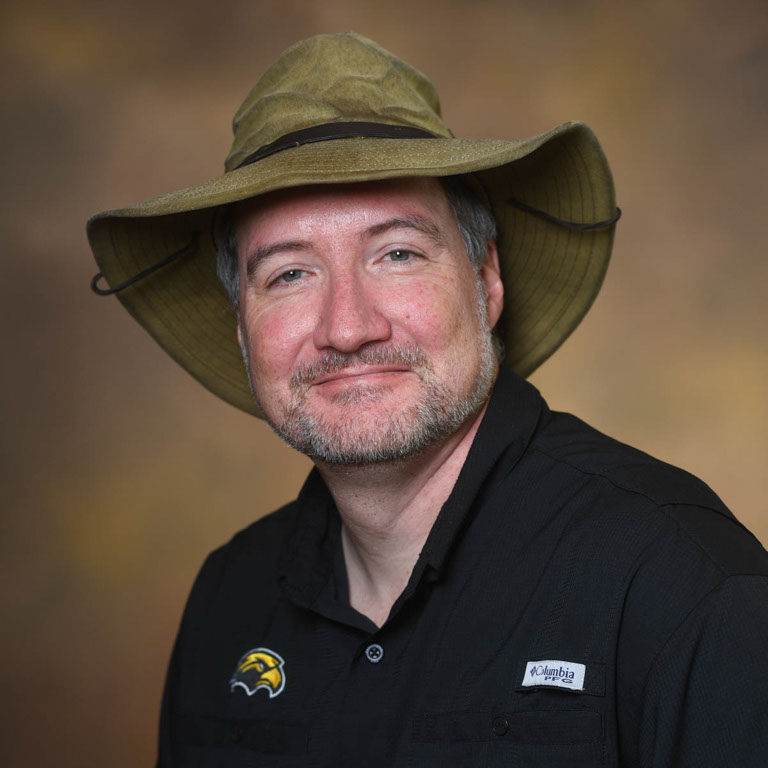 Dr. David Holt, a professor of geography, will use ground-penetrating radar (GPR) Oct. 27 in conducting an examination of two sites at the Holly Oak Cemetery in Pineville, Louisiana, where the bodies were allegedly interred after the riot that took place Jan. 10, 1942 on Lee Street in Alexandria.

The first planned search, set for Oct. 13, was postponed because of Hurricane Delta.

The report goes on to state that three African-American soldiers were critically wounded and 29 others injured. Civilian testimony given over the last several decades indicates that between 20 and 300 soldiers died in the riot, and possibly some civilians. According to these same reports, the deaths were covered up using false documentation, and bodies may have been buried in an undisclosed mass grave site in Mississippi or at the Holly Oak Cemetery, a predominantly African-American cemetery located on Holly Oak Lane in Pineville. 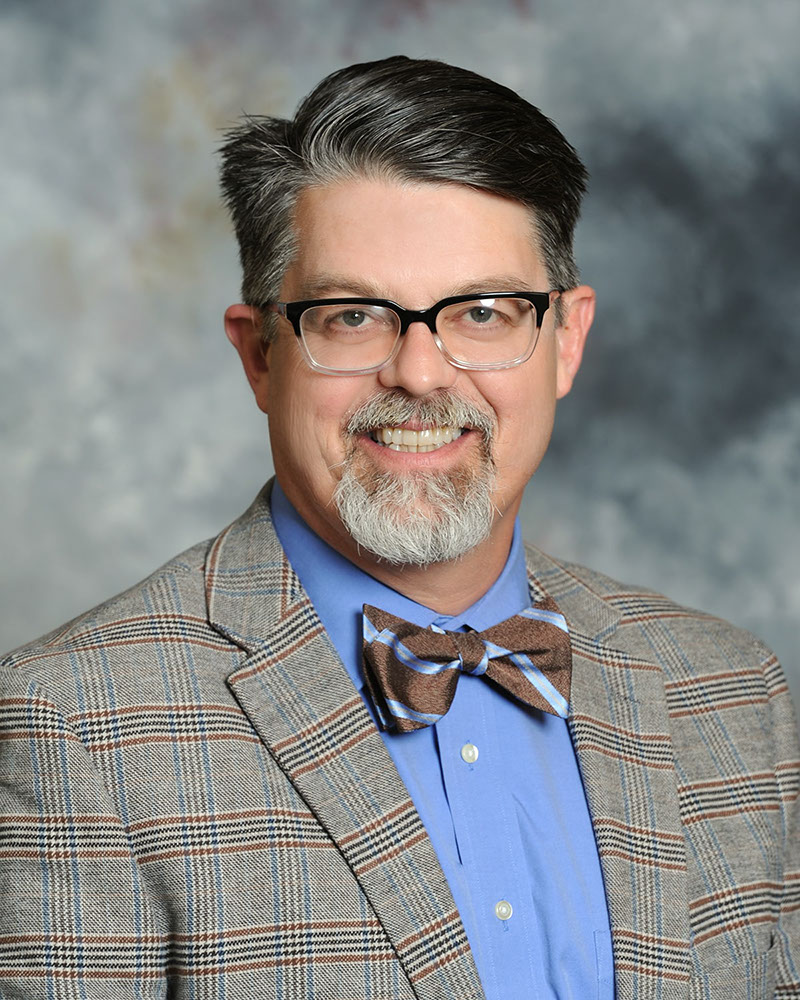 Dr. Douglas Bristol, professor of history and co-director of the USM Center for the Study of the Gulf South, wrote about the 1942 Lee Street Riot in his book “Integrating the U.S. Military” and connected Dr. Holt with a local group in Alexandria that wants to solve the mystery.

“A member of the Alexandria group, Michael Wynne, read the book and then contacted me,” Dr. Bristol said. “He mentioned wanting to scan a rumored site of a mass grave, and I said, ‘you're in luck. My colleague, David Holt, has used ground-penetrating radar to scan for graves.’ I put the group in touch with him, and will help with the scan.”

Wynne, a retired 40-year law enforcement veteran, claims that for the nearly 80 years since the riot, a mass cover up has prevented its true story from getting out.

“It’s unbelievable that this has been kept out of the public’s attention for this long, but we’re finally trying to find out the truth,” said Wynne, who describes himself as an amateur historian with special interest in family histories. “I hope we can find evidence that, once and for all, can solve this mystery and bring closure for the families as to what happened.”

Dr. Holt and search teams that include USM students have scanned nine different cemeteries over the years, including in Hattiesburg and on the Gulf Coast, looking specifically for unmarked gravesites. His assistance was sought after Hurricane Katrina to help identify grave sites at a Long Beach cemetery damaged by Hurricane Katrina.

“The use of GPR gives us an ability to evaluate areas of interest over wide spaces where the only other methods include manual probing or excavation,” Dr. Holt said. “Coffin, urn, and shroud burials give signatures that can lead to confidence levels increasing in areas of suspected burials.”

Dr. Holt will use a 400-megahertz GPR at the sites that allows for a signal to travel into the earth and reflect to the receiver. The change in transmission rates of that signal allows researchers to interpret variations of materials below the surface. He will also use a live scan method that requires flagging of areas of interest in order to rescan areas of higher confidence.

“I describe the GPR as transmitting a ‘song’ that the receiver listens for, and records the rate of that ‘song’ bouncing back,” Dr. Holt said. “It is similar to Doppler radar that we use to track storms with two main differences: first, all of the signal is returned to the GPR, whereas Doppler only sends signals back when it hits objects in the air and, second, Doppler can presume the returning signal hit water or ice, and GPR’s signals will hit a wide variety of objects in the earth. The ‘song’ that is transmitted by the GPR shifts what we can see.”

Dr. Holt said projects like the one at Holly Oak Cemetery have a bigger meaning than just managing scientific equipment. “They have a relevant human component,” he said. “To find evidence of a mass grave will help reopen the case of the Lee Street Riot deaths that were clearly covered up.”

The recent discovery of human remains in a search for bodies from the 1921 Greenwood District race massacre in Tulsa, Oklahoma, gives Wynne reason to believe the attempt to search at the Holly Oak Cemetery is worth the effort.

“I’m extremely grateful to Dr. Holt and Dr. Bristol for taking this project on, they could be on the verge of solving one of the greatest mysteries in the nation’s history,” he said. “But even if we don’t find anything Tuesday, just bringing attention to it is more than has been done in 80 years.” For information about USM Gulf Park, visit https://www.usm.edu/university/gulf-park-campus.php.