USM Home/News/2020/ “I see a need, I meet a need:” USM Sophomore Starts Important Conversations in Oxford, Miss. with Establishment of Community Forum

“I see a need, I meet a need:” USM Sophomore Starts Important Conversations in Oxford, Miss. with Establishment of Community Forum 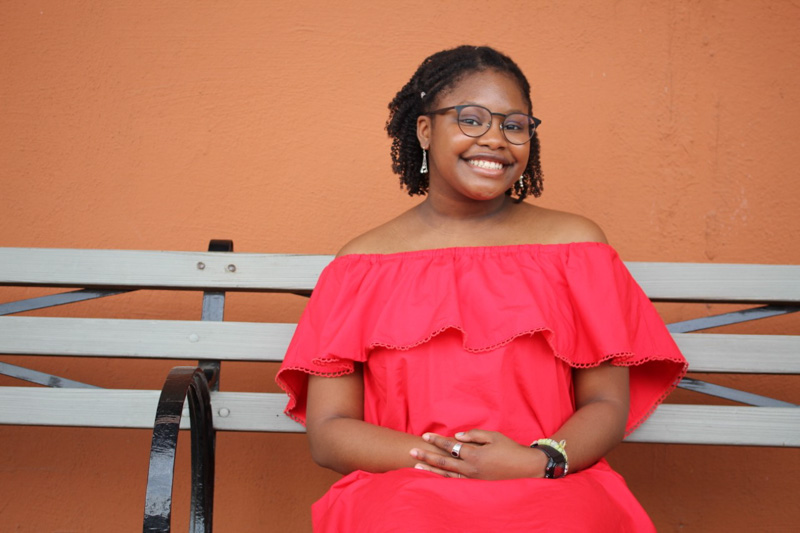 Klaria Holmes is using her newfound activist voice to get her hometown talking.

A sophomore psychology major and Honors College student at The University of Southern Mississippi (USM), Holmes is founder of “Conversations for Change – Oxford, Mississippi,” an online forum in which local residents come together in open dialogue with public officials to achieve positive action on community concerns.

“I wanted to create an opportunity in which we could communicate about local and national issues that might also affect us, in order to make our community better for everyone who lives here,” Holmes said.

In the wake of the May 25 death of George Floyd – an African American who died after an encounter with Minneapolis, Minnesota police whose chokehold tactics have been blamed for his death - Holmes felt inspired to join public protests against police brutality against black Americans, including one that took place in Jackson, Mississippi a few weeks ago. She changed her mind about participating, however, after her parents expressed concerns about her safety and potentially contracting the COVID-19 virus.

Holmes then considered organizing a similar rally in Oxford. But after discussions with friends and other members of the community decided that an online effort, with input from local residents on a discussion of the issues of racial injustice and its intersection with policing, would be more successful and safer.

“I wanted to see what could be improved, based on what’s going on nationally, in the eyes of community members,” Holmes said.

Holmes said that while Oxford has not had any reported incidents of police brutality or ongoing issues of friction between residents and law enforcement, she wanted it to be the opening topic for the forum. With the support of her parents and the help of local leaders, including a longtime civil rights activist, Holmes solicited forum participants.

“In the beginning the hardest part was getting people who felt comfortable being part of the panel,” Holmes said. “Some didn’t feel qualified to speak about such a serious issue. But my approach to this was that there is actually value in not knowing, because this is a learning experience, and everyone involved has something good to offer from their own life experiences.” Two high school teachers, a local pastor, a civil rights activists and two University of Mississippi students formed the initial makeup of the panel, as Holmes sought to get “as many different people as possible who had experienced varying types of interactions with law enforcement.”

Even though Conversations for Change is Holmes’ brainchild, she eschewed the spotlight, choosing to step out of the way once she established the forum to let its members “get the ball rolling themselves, and take it from there.”

“They have more life experiences with things like this than I do,” Holmes said. “I wanted them to have the conversation, to communicate with each other initially about what we want Oxford to look like, and then come up with solutions to issues concerning interactions with law enforcement and bring them to those who could implement them.”

Holmes then reached out to representatives of the Oxford Police Department, the Lafayette County Sheriff’s Office and Oxford Mayor Robyn Tannehill to solicit their interest in talking with the group about its concerns and ideas.

“I was impressed with how open the mayor and leaders of the three law enforcement agencies were to hearing from us,” Holmes said. ‘Oxford prides itself on being a loving, caring community, and they really exemplified that spirit in wanting to be a part of what we’re doing.”

After meetings between the two ensued, Holmes said the focus became what community members believe is a lack of communication between them and local law enforcement, as well as outreach from the agencies. As an example, a positive discovery by the group was that the Oxford Police Department had undergone training in de-escalation and bias training --unknown to its members until the exchange.

“What was also shared is that we want to know our officers, those who serve to protect us,” Holmes said. “Oxford is close-knit, so our people want to know who the actual person is behind the badge.”

Holmes said that after nearly a month, the ball is now rolling. Members of the community forum, law enforcement agencies and Mayor Tannehill are working together to craft solutions for improved communication, and a community advisory board has been established to facilitate those exchanges going forward.

“We want things to happen as soon as possible, and we just ask that we get updates as time goes by,” Holmes said. “There’s so much tension in the country right now, and we really believe a lot of issues can be fixed with more open communication.”

“The work that Klaria is doing is so important, at this time especially,” Tannehill said. “There are many people who talk about change, but Klaria takes action, and it’s great to see our younger generation stepping up to lead. I believe Conversations for Change will continue to spark discussions that will lead to healing, understanding and change.”

Conversations for Change forum members include Dr. Alfred Hall, senior pastor of Oxford’s Philadelphia M.B. Church, and one of Holmes’ former teachers at Oxford High School, Katherine Brown. Both are hopeful the panel’s work will lead to transformational results.

“Klaria Holmes has exhibited great passion and leadership, great wisdom and a persistent demeanor enabling her to organize powerful conversations for change that have been inclusive and representative of our community at large,” Dr. Hall said. “I have been most impressed with her ability to engage our mayor, chief of police and sheriff and secure their participation during the conversations.

“Most importantly, Klaria was thoughtful in her approach to organize these events, virtually, in order to protect the safety of all participants during the COVID-19 pandemic. We are extremely blessed to have such a leader in the making, coming into her own, for such a time as this.”

A ninth grade English teacher and co-founder/sponsor of RISE, a personal wellness group at the high school where she served as a mentor for Holmes, Brown describes Conversations for Change as “a genuine listening and learning space that can lead to tangible results.”

“It feels like a true movement in the right direction,” she said.

Brown says she’s “proud of and impressed” with her former student’s work, and how Holmes has continued to grow as a leader since graduating last year from Oxford High School.

“She is a light in this world, and I always knew that about her,” Brown said.

What’s the next topic for Conversations for Change? Holmes would love to see racial reconciliation addressed, including how people willingly separate themselves residentially -- “We segregate by choice, and we should tear down the walls we selfishly put up ourselves,” she said -- as well as improved voter turnout, particularly among young people.

Holmes credits her experience as a student in her freshman Honors Colloquium classes, taught by USM history professor Dr. Matthew Casey, for helping take her activism to the next level. The class included discussion of the American civil rights movement and other past and present topics related to social justice.

“I wrote in my high school paper about different issues, but was never vocal about them, not back then,” Holmes said. “But in Dr. Casey’s class - being around other students who care so deeply about the same issues I do – that fueled my spirit, and built a foundation for taking action.

“I also learned from Dr. Casey the importance of research – not to just trust the headlines, but go deeper, to connect issues within a context, which really enhanced my thought process and built a great foundation for critical thinking. I don’t think I could have done something like this (Conversations for Change) a year ago.”

Dr. Casey says he’s impressed, “but not surprised” that Holmes took “concrete and constructive action in the wake of the murder of George Floyd and the national debates that his death engendered.”

“It's one thing to assemble the mayor and other community leaders so effectively, it's even more remarkable when you consider that she’s on her summer vacation from her freshman year in college,” Dr. Casey said. “As an educator, nothing makes me happier than to see my students succeed, though usually I have to wait longer than one week after classes let out to see that happen."

Holmes plans to obtain a masters’ degree in psychology after completing her undergraduate degree and work as a school guidance counselor, or in a position specializing in mental health issues impacting black young adults.

“There’s very little conversation in the black community about mental health, and I want to be a part of changing that in my career,” she said. “That’s the same way I feel about Conversations for Change. I see a need, I meet a need.”