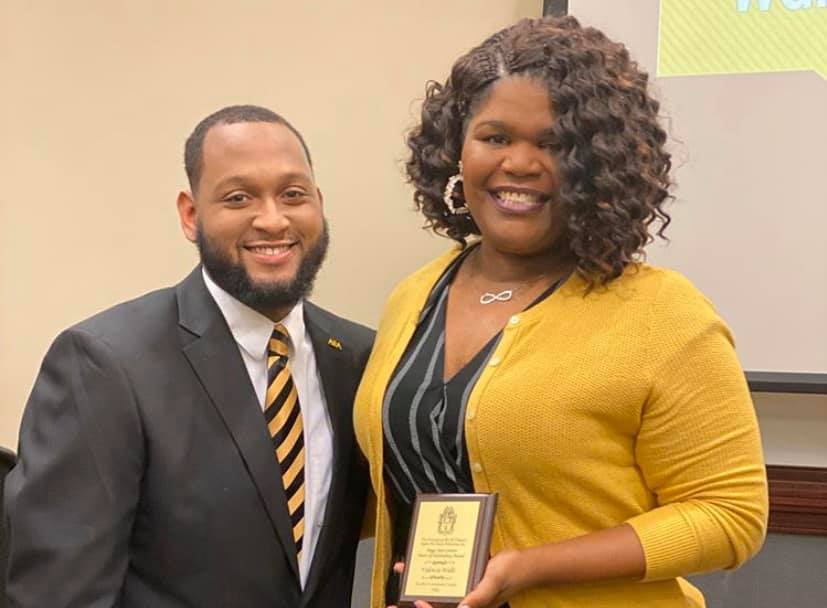 Valencia Walls, coordinator of The University of Southern Mississippi’s (USM) Office of Multicultural Programs and Services and adviser to the University’s National Pan-Hellenic Council, received the Peggy Jean Connor “Heart of Hattiesburg” Award Feb. 27 during a ceremony held on the USM Hattiesburg campus.

Walls was presented the recognition in the award’s Faculty/Community Leader category. The event, which honors the late civil rights leader, was sponsored by the Mu Xi Chapter of Alpha Phi Alpha Fraternity, Inc.

A Hattiesburg resident who worked alongside civil rights legends Fannie Lou Hamer and fellow Hattiesburg native Victoria Gray, Connor played a key role in the civil rights movement in Mississippi, serving as state executive secretary of the Mississippi Freedom Democratic Party (MFDP), treasurer of the COFO-Hattiesburg Project, and as a MFDP delegate to the Democratic National Convention in 1964. She also taught citizenship classes in local churches, despite the danger of violence from those opposed to desegregation and the actions of civil rights workers. Connor died in 2018.

“It was truly an honor to receive an award named for such an activist and pillar in the Hattiesburg community,” Walls said.

A native of Jackson, Mississippi, Walls holds a Bachelor of Science Degree and a Master of Education, both from USM.  She has worked in student development for the last 17 years. Her other career honors include the Outstanding Staff Award from the USM Office of Fraternity and Sorority Life; Outstanding Service Award from the Hattiesburg National Pan- Hellenic Council; Advisor of the Year Award by the USM Office of Leadership and Student Involvement; 2011 Greek Hall of Fame Inductee; Outstanding Service Award from the Southern Miss Alumni Association, and the John Hope Franklin Award from Alpha Phi Alpha Fraternity Inc- Mu Gamma Lambda Chapter. She is a member of Zeta Phi Beta Sorority, Inc.