Several separate collections are housed within the GCRL Museum. The largest of these, the GCRL fish collection, now includes more than 355,500 specimens in nearly 36,560 lots. A total of nearly 285 families and 3450 species are represented in the collection and its scope is worldwide, covering all major ocean regions and continents except Antarctica. The Museum also includes a significant, but largely uncataloged, collection of marine and estuarine invertebrates, as well as a very small collection of local amphibians and reptiles. The invertebrate collection, which includes more than 6600 cataloged lots in 11 phyla and 280 families, is estimated to number well over a million specimens. The strongest representation is regional, but other areas, including the Caribbean and Northwestern Atlantic, are also well-represented. 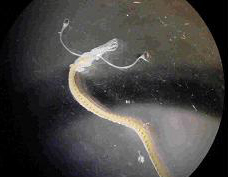 A large collection of ichthyoplankton material is also housed at the Gulf Coast Research Laboratory and part of that material is deposited in the GCRL Museum. Ichthyoplankton collections initially developed by C. E. Dawson have been supplemented by years of GCRL fisheries collections throughout the Gulf of Mexico. Laboratory holdings of ichthyoplankton material greatly expanded in the 1980s during the active tenure of the late Sally L. Richardson, Joanne Lyczkowski-Shultz (National Marine Fisheries Service, Pascagoula Laboratory, Mississippi) and associates. During Richardson's active tenure at the Laboratory (1978-1985), efforts were first made to develop synoptic collections. Although the majority of these collections remain uncataloged, they include numerous representatives of larvae of both common and rare fishes from the Gulf of Mexico, with synoptic collections of materials worldwide. Active collection by GCRL's ichthyoplankton biologists assure that the larval collections will continue to increase in size and importance.

The GCRL Museum currently serves as the regional SEAMAP Invertebrate Plankton Archiving Center (SIPAC), housing replicate samples from NOAA SEAMAP Cruises conducted in the Gulf of Mexico, as well as some identified invertebrate material from those samples. In addition, the Museum serves as a repository for voucher material collected during the Mississippi/Alabama Rapid Assessment Team (AMRAT) sampling program carried out in Mobile Bay (2003) and Mississippi Sound (2004). Museum staff provided taxonomic expertise in the identification of material collected during the AMRAT project and provide similar services for personnel at federal, state and local agencies and institutions, as well as environmental consultants and GCRL scientists.

For more information on the collections housed
within the GCRL Museum, contact: