On Friday, Oct. 15 at 3:30 p.m., The University of Southern Mississippi (USM) R.C. University Union will dedicate six flags of Native American nations represented by students enrolled at the university. Members of the USM and local communities are invited to attend this ceremony.

The raising of the flags is a visual effort to underscore that the USM student community is truly global, one that each of its members can learn from, said Assistant Vice President for Student Affairs Dr. Denny Bubrig. The project began three years ago with the placement of international flags in the Cook Union Building to recognize the international student community.

The flags will be placed alongside other flags from around the world and updated each academic year during the fall semester to reflect all communities represented on campus by students.

Native American nations to be represented by flags hoisted Oct. 15 include the following:

*The Jena Band of Choctaw Indians

*The Poarch Band of Creek Indians

*The Mississippi Band of Choctaw Indians

*The White Earth Nation of the Ojibwe Tribe

“At most institutions, the campus union is considered a non-academic ‘heart’ of campus, or the campus ‘living room,’ if you will,” Dr. Bubrig noted. “One of our goals is recognizing the backgrounds, experiences and lives of our students, and in doing this, we want to make sure our community sees the union services, resources, and capabilities as accessible to all.

“Earlier this summer, as we were considering other ways to recognize our students and what they bring to the table, we realized we could do a similar project calling attention to the Native American students in our campus community. Beginning next fall, these flags will be updated alongside the international ones to reflect the current USM enrollment.”

Dr. Tammy Greer, a professor of psychology and advisor to the Golden Eagles Intertribal Society (GEIS) and co-director for the Center for American Indian Research and Studies, said she and Native American students at USM are grateful for the effort to recognize their place in the university community.

Present and former GEIS students worked with Dr. Bubrig in organizing the flag ceremony. Harold “Doc” Comby, a member of the Mississippi Band of Choctaw Indians who emcees at annual Golden Eagle powwows, will be a featured speaker at the ceremony and will remark on the importance of creating space for this kind of diversity.

“I appreciate Dr. Bubrig’s work to have our flags displayed in the union and celebrate our Native students,” Dr. Greer said. “It takes extra effort to look around and notice what is missing, which groups have been left out, and then step up to make sure they are included.

“And, as we just celebrated Indigenous Peoples’ Day, this event is right on time.”

For more information about this event, contact the University Union at 601.266.6194 or email unionFREEMississippi. 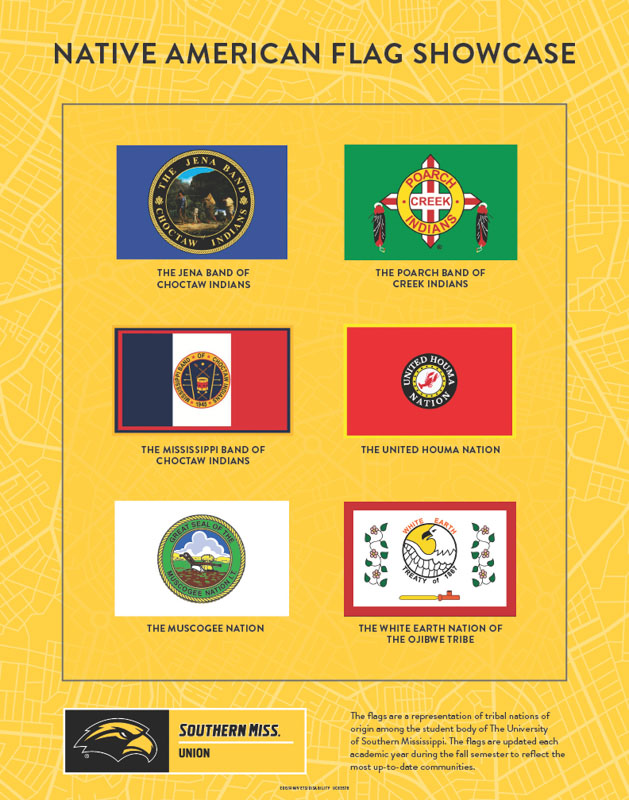